If you’ve been on this blog before, or watched the show, you’re probably familiar with the fact that I’m half Australian.  My mum’s from Adelaide, a beach town in South Australia.  It’s near the Barossa Valley (basically Australia’s Napa) and has a big mediterranean influence from Italian and Greek families that live there.  So when I wanted to do an episode inspired by my Mother’s Motherland, I realized it was a fun opportunity to show my take on Australian cuisine beyond the Tuck Shop.  Meat pies and oysters kilpatrick are classic Aussie dishes, but the produce, attention to seasonality, and diversity of influences are all things outsiders might not immediately think of when presented with the idea of “Aussie Cuisine.”  I used some of my favorite meals and chefs from South Australia as jumping off points to create fresh and bright dishes I’d be happy to bring to any Aussie grill out.  Hopefully Maggie Beer,  Donna Hay, and the Australian side of my family approve! 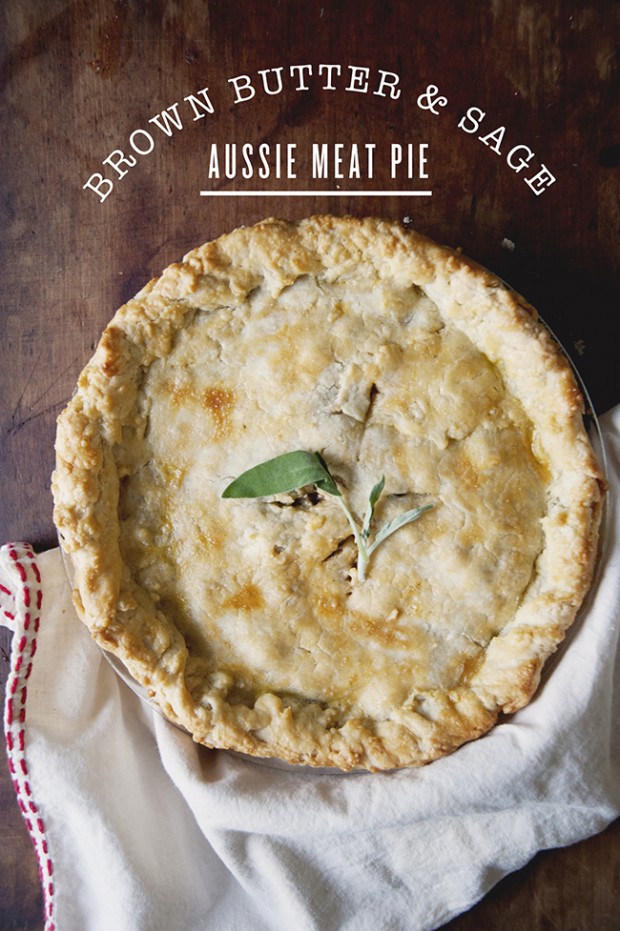 Made in a 9-inch pyrex pie pan

This is a double crust recipe, so you will only be using one for the tart.  Refrigerate or freeze the other one for future use

For the pie crust, in a food processor or quickly using your fingertips, combine the flour, sugar, salt and butter until the chunks of butter are broken down to the size of peas and the flour feels like wet sand. Add the first 1/4 cup of water and mix until the dough comes together easily. It’s too dry if it immediately clumps apart. Add two tablespoons of water at a time, you can always add more water but not more flour, so careful not to add too much! Bring the dough into two balls and plop them on top of two sheets of plastic wrap. Loosely wrap up the ball and press down, smooshing the ball into a disc about an inch thick. Pop them in the fridge for 30 minutes while you busy yourself with the other stuff.

Preheat the oven to 400 degrees F.

Prepare the filling. Place the butter into a 12-inch saute pan and set over medium heat. Add the onion and sauté just until they begin to take on color, approximately 5-10 minutes. Add the garlic and the meat, sprinkle with flour, salt and pepper and cook until browned and cooked through, approximately 5 minutes.  Add the tomato paste, broth, Worcestershire, rosemary, thyme, carrots and celery and stir to combine. Bring to a boil, reduce the heat to low, cover and simmer slowly for 5 minutes or until the sauce is thickened slightly.

In a small sauce pan, melt the butter and add the sage, cooking until the butter is browned.  Set aside off heat.

Meanwhile, roll out your pie dough to 1/8 inch thick on a floured surface, and loosely fill a pie dish with one round.

Add the peas, brown butter, and sage to the meat mixture and pour into the pie dish, over the dough. Pop the other the round on top of the pie, pinching the edges to secure. Slice a couple of vents on top and brush with egg wash (just a a beaten egg w a touch of water).

Place on a half sheet pan on the middle rack of the oven and bake for 20-30, or until the pastry is golden brown and juices bubble out of the vents. Remove to a cooling rack for at least 15 minutes before serving. Serve with a dollop of tomato sauce or ketchup to make it truly Aussie. 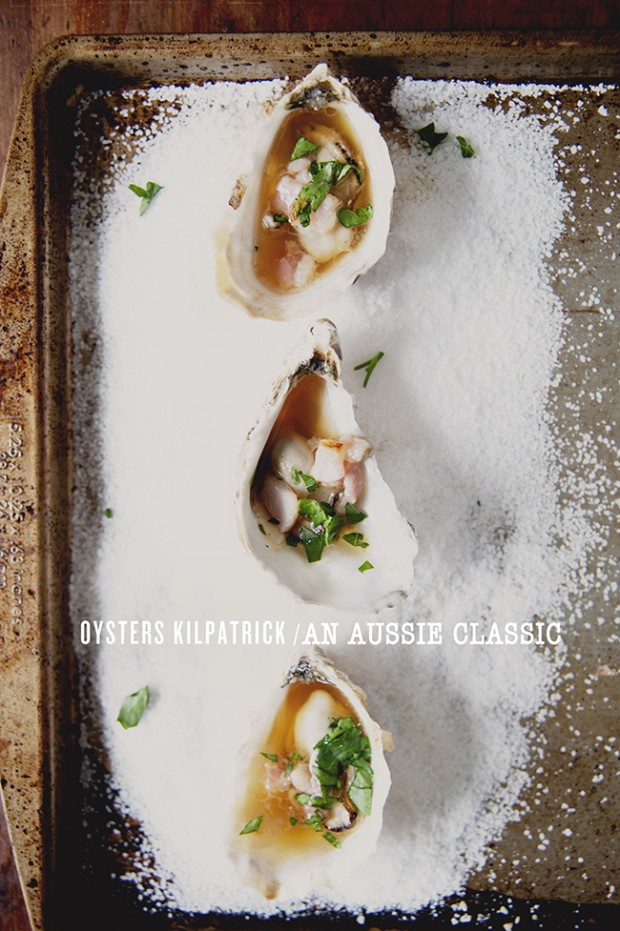 Rock or sea salt onto a rimmed baking sheet, forming a light coating.  This will hold the oysters in place as they cook.

In a small saucepan, combine butter and worcestshire sauce, melting together over medium heat.

Cover your hand in a kitchen towel, and hold the oyster in this hand. Have the hinge (what looks like the back of the oyster) facing out. Take your oyster knife and wiggle it into the hinge. Don’t force it, it should go in pretty easily. If it’s difficult, try moving the knife to the side a bit to get a different angle. When it’s in, twist the knife to pop the hinge, and the shell, open. Slide the knife against the top of the top shell to slice the abductor muscle. Remove the top shell, and slice the bottom abductor muscle under the oyster. I then like to flip the oyster so it looks pretty in the shell. Flick out any loose shell. Hooray! You’ve shucked an oyster, now eat it.

Place your shucked oysters (laying in the bottom half of the shell) onto the baking sheet.  Drizzle a little of the worscestshire/butter mixture over each one, and top with a little bit of bacon.  Place the oysters in the middle of the oven and cook for 3-4 minutes, until the bacon it crisp.  Remove from the oven and sprinkle with parsley and spritz with lemon.  Enjoy immediately. 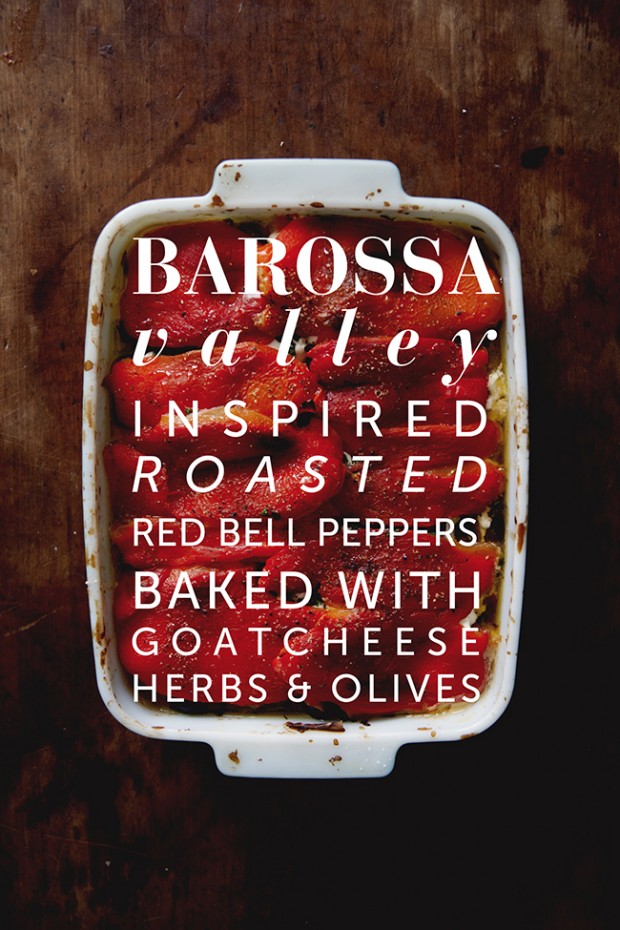 Made in a 9x7x2 pyrex baking dish

Preheat the oven to 500 degrees.

Place the whole peppers on a baking sheet and place in the oven for 30 to 40 minutes, until the skins are completely wrinkled and the peppers are charred, turning them twice during roasting. Remove the pan from the oven and immediately cover it tightly with aluminum foil. Set aside for 30 minutes, or until the peppers are cool enough to handle.  Turn oven down to 400F.

Remove the stem from each pepper and cut them in quarters. Remove the peels and seeds and place the peppers in a bowl along with any juices that have collected. Discard the stems, peels, and seeds.

In a 9 x 7 baking dish, line the bottom with one layer of bell peppers.  Sprinkle with olive oil, then goat cheese, olives, and herbs.  Season with a little salt and pepper, the repeat the layers until sealed with the last of the bell peppers.  Finish with olive oil, salt, and pepper, and then bake for 20 minutes, or until bubbly. Let it cool for 10 minutes, and then slice up, garnish with more herbs, and serve. 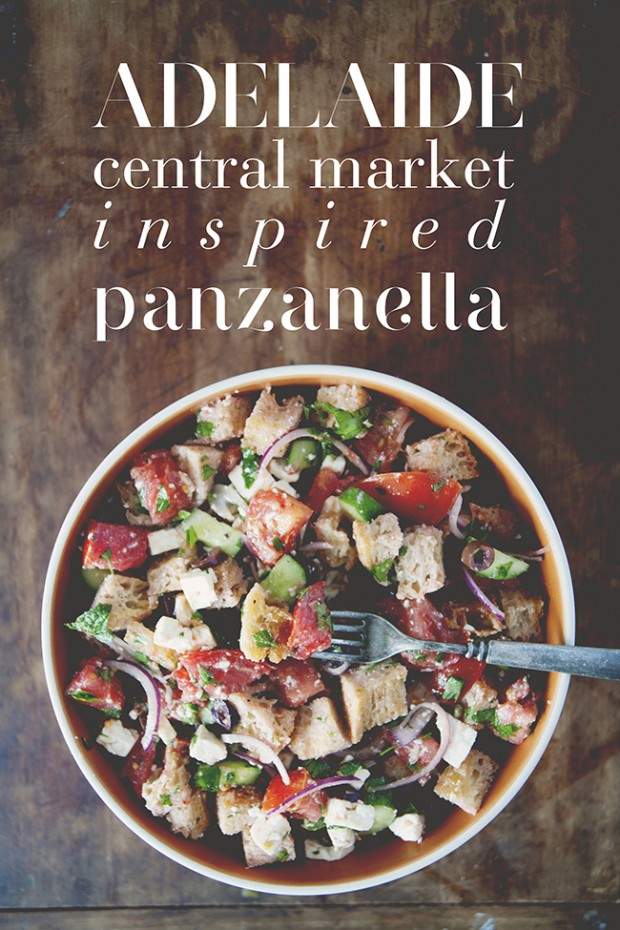 Spread the bread onto a baking pan and drizzle with olive oil and salt.  Toast for about 10 minutes or until browned.

In a large bowl, mix the remaining ingredients. Add the bread cubes and toss with the vinaigrette. Season with salt and pepper. Serve slightly warm, or allow the salad to sit for about half an hour for the flavors to blend.