My love of this delicious bivalve is pretty well documented, and I couldn’t help but return to it. I’ve been digging through cookbooks from the 30s and 40s, and let me just say, the oyster was a VERY popular bite then. And way not? It was cheap and wonderful to eat every which way. Fried, stewed, baked, grilled, raw, FRIED. I linger on the fried because that’s what I tried today: Fried Oysters. Plump, juicy, just crisp and golden brown. YUM yum yum yum yum yummmmmmm.

But enough about fried for a moment. As lovely as they are, raw is really my favorite. That first burst of flavor and shot of icy cold ocean is as exhilarating as it is delicious. With a little lime, cilantro, and serrano chili? Well, it’s practically a feast.

Both of these recipes take practically no time to make, and if you’re not into the idea of oysters, you can try the fried recipe with shrimp. Enjoy! 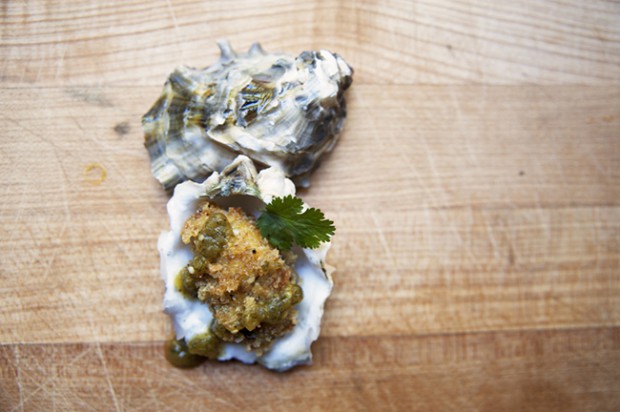 a handful of cilantro

In a food processor, pulse together the bread, salt, pepper, and cayenne until fine breadcrumbs. Dredge the oysters in the yolk and coat in the bread crumbs. Heat the olive oil over medium heat until just simmering (test it by sprinkling some crumbs into it. It should sizzle and come to the top.) and toss the coated oysters in. Let them fry until golden brown, flip, and fry some more. They should cook for about 1 minute total. Set aside on a paper towel.

Meanwhile, peel and broil the tomatillos for about 5-10 minutes, or until charred and juicy. Char the poblano over an open flame, then scrape off the skin and deseed it. Chop it roughly and pop it, the tomatillos, the garlic, cilantro, and hot sauce in a food processor. Pulse it and taste for season.

Put the each oyster into a shell. Drizzle the oysters with salsa verde and garnish with cilantro. 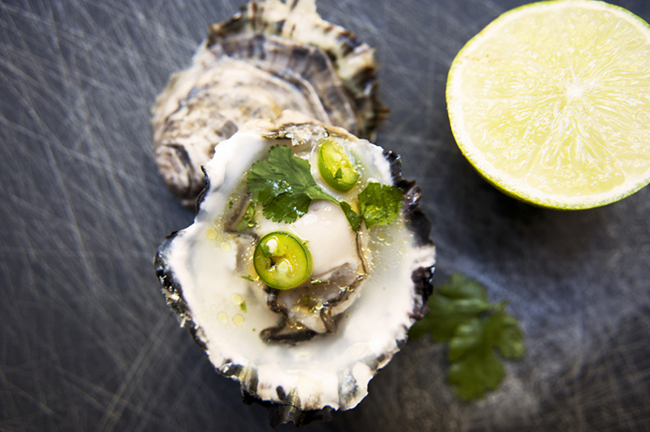 1 dozen oysters, shucked and on the half-shell

Combine the lime juice, chili, cilantro, and olive oil with a little salt and pepper to taste. Drizzle over the oysters and enjoy!