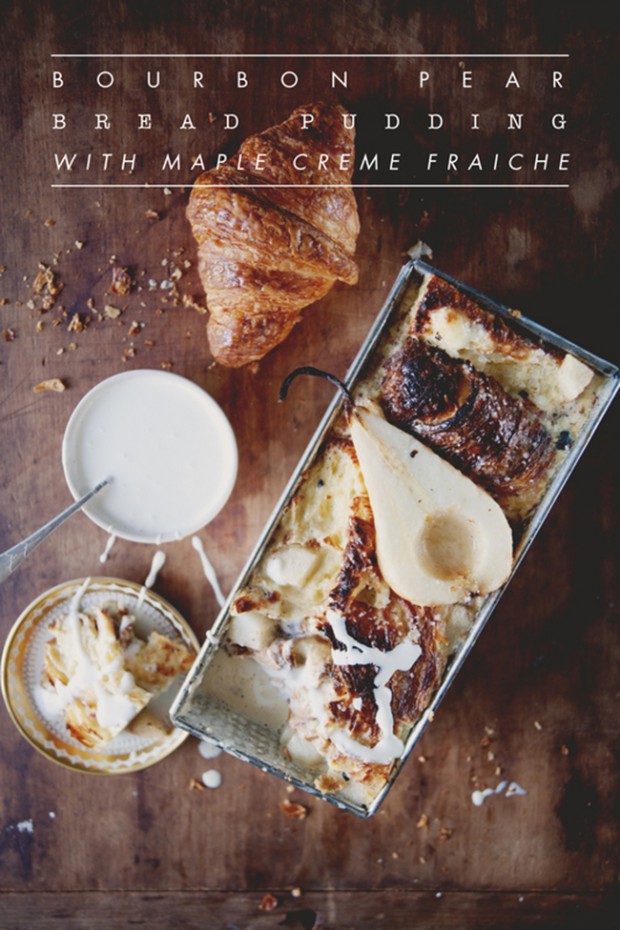 Sometimes I feel like I’m playing recipe bingo.  A basket twirls ping pong balls with ingredients written on them, it pauses and I pull out a few, reading them out loud: Bourbon! Pear! Vanilla! Maple! Bread Pudding!

You could switch bourbon with rum, pears with apple, vanilla with cinnamon, maple with agave, and have an equally delicious dish.  It’s funny, but many times ingredients can act as placeholders. Once you understand why something is in a dish, finding an analog shouldn’t be much trouble.  With something as versatile as bread pudding, this recipe is begging to be tweaked, twisted, and made personal.  Sometimes inspiration can come from formula, and in this case, it was the simple combination of flavors along with a visual.  I wanted to pop a gorgeous baked pear half on a dessert, and built the flavor profile around that.  In the end, it doesn’t really matter where the inspiration comes from, just that it tastes good (and this does). 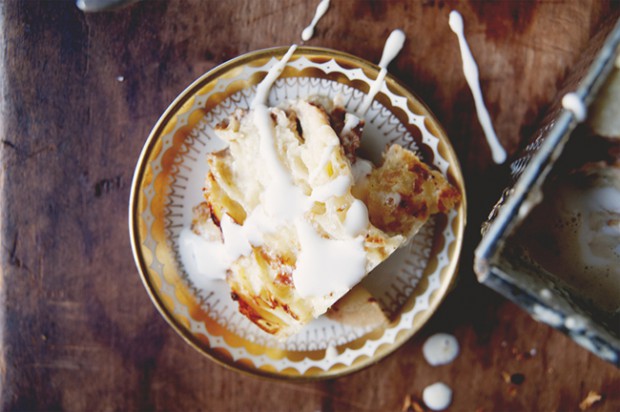 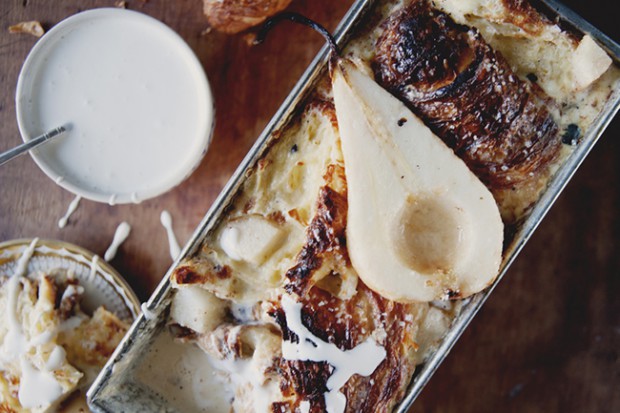 2 ripe bosc pears, peeled (save one half for garnish)

3 cups half and half

Preheat oven to 325 F. If the croissants are fresh, lightly toast them in the oven for 5-10 minutes.  You don’t want color, you just want them dried out a bit so they absorb the custard fully.  Lightly grease a loaf pan (I used a 9 inch one) with butter. In a medium bowl, stir the sugar, spices, and creme fraiche or sour cream cream into the half and half. In a separate bowl, combine the vanilla and salt with the beaten eggs.

Combine the egg mixture and the half and half mixture, mixing well. Add the bourbon and stir to combine.

Put a layer of croissant pieces on the bottom of the pan and sprinkle with a third of the chopped pears. Repeat until the loaf pan is full (I did three layers). Pour the custard mixture over the croissants in the pan. Let the mixture stand for about 15-20 minutes or until the croissants absorbs most of the milk mixture.  Top with the pear half for garnish. Bake for 50-60 minutes, or until the custard is set but a little jiggly in the center.

Remove from oven. To garnish, mix the crème fraiche or sour cream with vanilla extract and maple syrup.  Serve on the side. Enjoy!