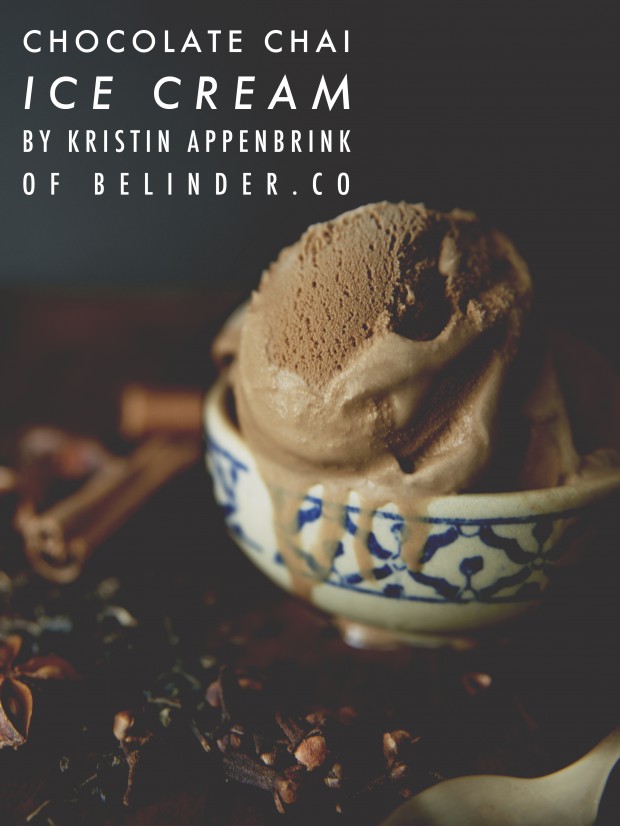 It’s time for another installation of the ice cream series by my friend Kristin Appenbrink!  I asked her to share some of her favorite ice cream recipes on The Kitchy Kitchen over the summer, so expect two scoops of awesome every month. For more delicious recipes, make sure to check out Kristin’s Blog, Belinder.

I’ve been in San Francisco for a month now, and just today I finally found a place to live, signed my lease, and got my keys. This recipe, like the past month of my life, is complex. It has lots of flavors, and can be a challenge to figure out, but it’s incredibly rewarding. I came up with this flavor based on a cake that has become a staple in my baking repertoire in the past year. I adapted this Chocolate-Earl Grey Cake recipe from Real Simple.  Instead of using the Earl Grey tea, I substituted in homemade chai concentrate. Such a good upgrade! And because of the way my brain works, I decided chocolate and chai would work just as well in frozen form. This is actually an adaptation of my first original ice cream recipe—Dirty Chai—that I created for the 2011 Ice Cream Takedown, which I didn’t win, but which you can read about on Simply Stated.

So give this chocolaty, kinda-spicy, totally delicious flavor a try, and let me know what you think. 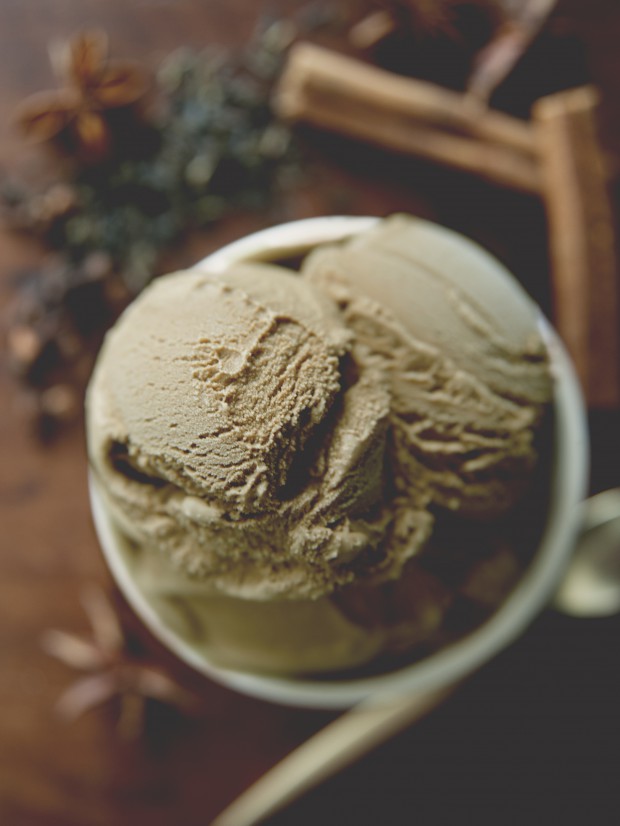 Combine heavy cream and whole milk in a 3 quart saucepan, and heat over medium heat.  Stir in sugar, cocoa powder, and salt. Continue to stir until the sugar and cocoa powder are completely dissolved.  Bring mixture to a boil. Turn down to a simmer, and cook for approximately 4 minutes.

Stir in ginger, cardamom pods, star anise pods, cloves, peppercorns, nutmeg, orange zest, tea leaves, vanilla bean, and cinnamon stick and remove from heat. Cover with a tight fitting lid and steep for 25 minutes.  Using a fine mesh sieve, strain out the spices and tea leaves and discard the solids. (This might take a couple of passes to catch everything.)  Chill the base in the refrigerator for at least 2 hours, until it is cool to the touch.

Freeze the base in your ice cream maker according to the manufacturer’s instructions.  Transfer to a plastic or glass freezer-safe container and freeze for at least 4 hours before serving.