I was prattling on about my love of Nancy Meyer’s films until my husband and his brother interrupted that they had never seen her movies. They had a vague memory of her movie posters, the stylish yet accessible while keeping it together/falling apart heroines, and those chirpy, bright soundtracks. I could understand them missing The Holiday or Something’s Gotta Give, but It’s Complicated? Come on. It has Alec Baldwin and Steve Martin in it, two of my husband and brother-in-law’s favorite actors.

I put it on immediately.

My husband really tried, you could see him sort of laughing at jokes when I did, trying to seem engaged. His brother-in-law was politely watching too, but I swear I caught him texting at least once. But I guess it didn’t matter because I love this movie. L-O-V-E it. And even though watching it with would-be critics shines some of the cracks, like the ridiculous plot that Meryl Streep’s character can’t wait for a “real kitchen,” when her current kitchen is completely enviable and perfect. Or that one woman owns that many shawls.

One thing we could all agree on, though, was the food, and this is a food movie. The food stylist, Susan Spungen, worked closely with Meyers to develop recipes Streep’s character would make and enjoy. The food informs Streep’s journey, revealing her character’s experience as a pastry chef in France, her California roots, and that pain au chocolat is her way of flirting.

In one seen, her character whips up Croque Monsieur with a little romaine salad for Steve Martin. I’m not sure who really whips this up, except for the kind of people who have bechamel on hand, but regardless, it is a classic french fork-and-knife sandwich.

Bubbly, gooey, and crunchy, it pairs perfectly with a French Vinaigrette over romaine. So if you’re looking for a simple breakfast, lunch, or dinner a deux, this croque monsieur is an easy choice. Enjoy! 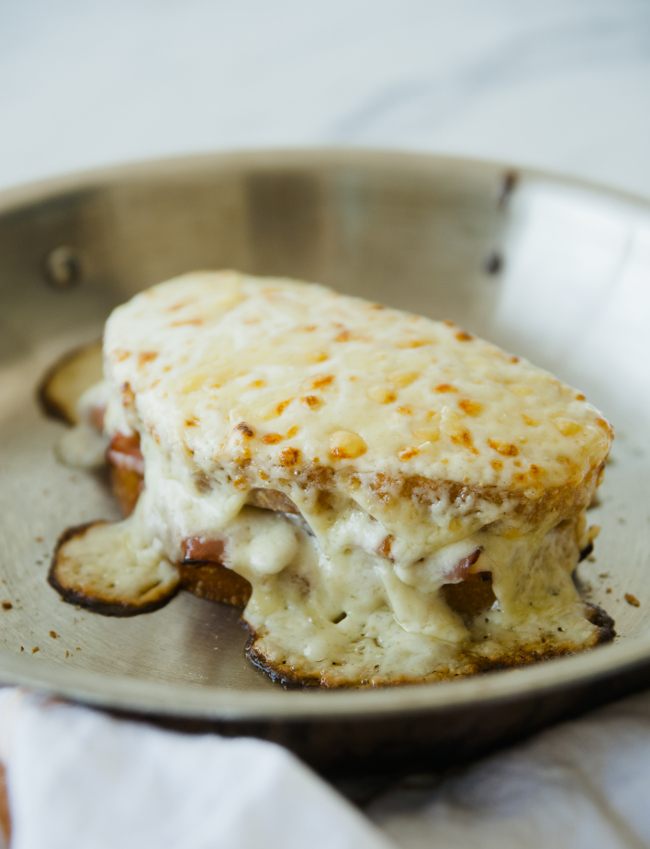 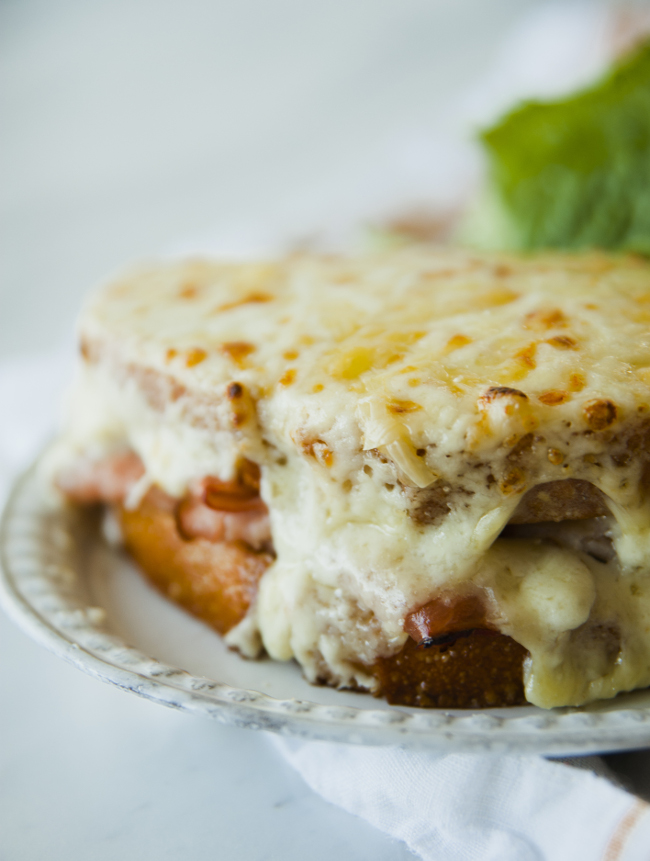 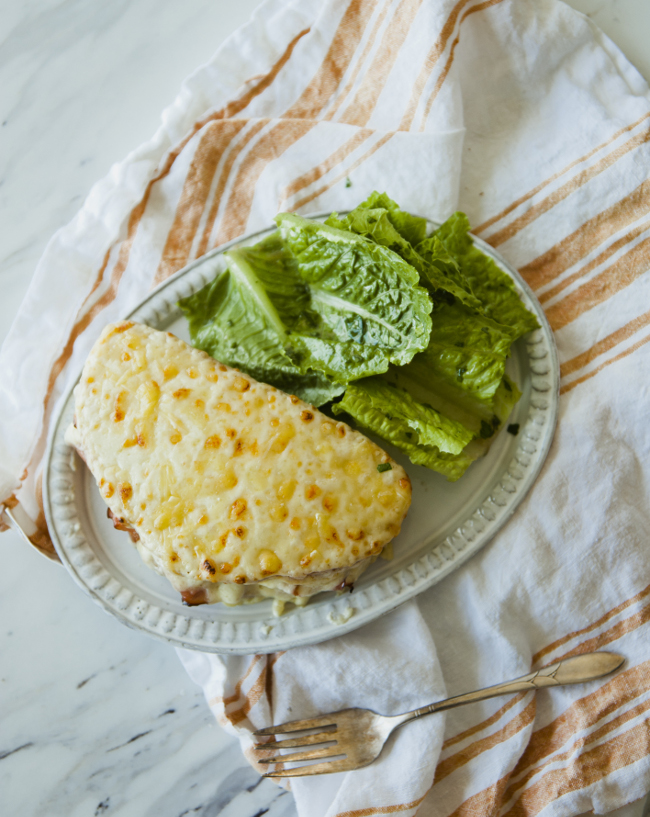 Preheat the oven to 400 degrees F.

Bring the milk and everything else except for the butter, flour, and parmigiano to a simmer.

In a separate sauce pan, melt the butter and add the flour.  Stir until doughy and smelling a bit nutty (about one minute).  Strain in the milk about a half-cup at a time, whisking to incorporate with the butter and flour mix.  It should be smooth and velvety, not chunky or too thick.  If it is, just add some more milk to thin it out. Add the 1/2 cup grated Gruyere, and the Parmesan and set aside.

To toast the bread, place the slices on 2 baking sheets and bake for 5 minutes. Turn each slice and bake for another 2 minutes, until toasted.

Lightly brush half the toasted breads with mustard, add a slice of ham to each, and sprinkle with half the remaining Gruyere. Top with another piece of toasted bread. Slather the tops with the cheese sauce, sprinkle with the remaining Gruyere, and bake the sandwiches for 5 minutes. Turn on the broiler and broil for 3 to 5 minutes, or until the topping is bubbly and lightly browned. Serve hot.