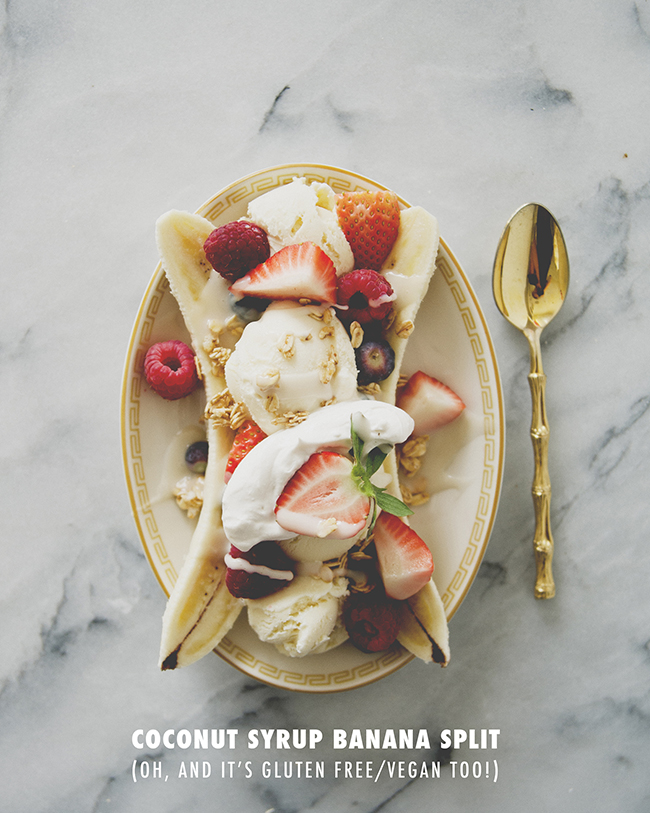 Many of my girlfriends and family are fun, awesome, and fabulous young moms, and though I’m still a few years away from little ones of my own, the idea of “mom friendly” dishes has popped up more than once.  I was a pretty open minded eater as a little kid, but my brother on the other hand…ketchup and brown stuff only.  Getting a vegetable across his plate was practically impossible. I’m surprised he survived toddlerhood without a bout of scurvy.  So to help out these lovely friends of mine, I’m dedicating mondays to mom-friendly dinners that are easy to make, delicious for everybody, and all with some secret veggies folded in.

Banana splits belong in Archie Comics. They’re bowl sized nostalgia bombs, exploding with whipped cream and chocolate sauce and cherries on top.  However, nostalgia is usually a longing for a time past, and I honestly can’t think of a moment when I actually ate a banana split.  Sundaes, sure, but the purposefulness that goes into a banana split evaded my childhood dessert routine entirely.  But I guess that’s what growing up is all about: righting the wrongs of childhood.

So here I am with my banana split.  Not just any banana split mind you, but a gluten free and vegan one.  I’m not going to try to pretend that this banana split is equivalent to a bowl of kale, however, as banana splits go, you could do a lot worse in the “wholesome eating” department.

First off, it relies heavily on coconut,  which has no cholesterol, is high in fiber, and a good source of iron.  It’s also a source for omega 3 fatty acids. It’s sprinkled with fresh berries, which provide  antioxidants, vitamin C, and fiber, and then a touch of homemade granola, sweetened with low glycemic agave.  Like I said, this isn’t a salad for dessert, but it strikes the balance of absolutely delicious and relatively good for you well.

Be warned: once you try the coconut whipped cream and coconut syrup, you will want to put them on all the things…ever.  It’s a little silly how delicious both of them are. 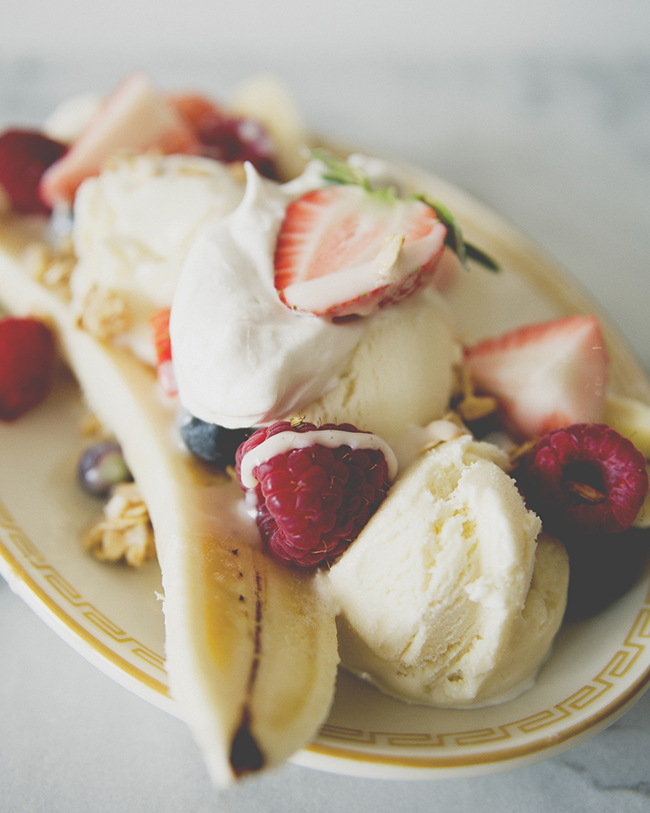 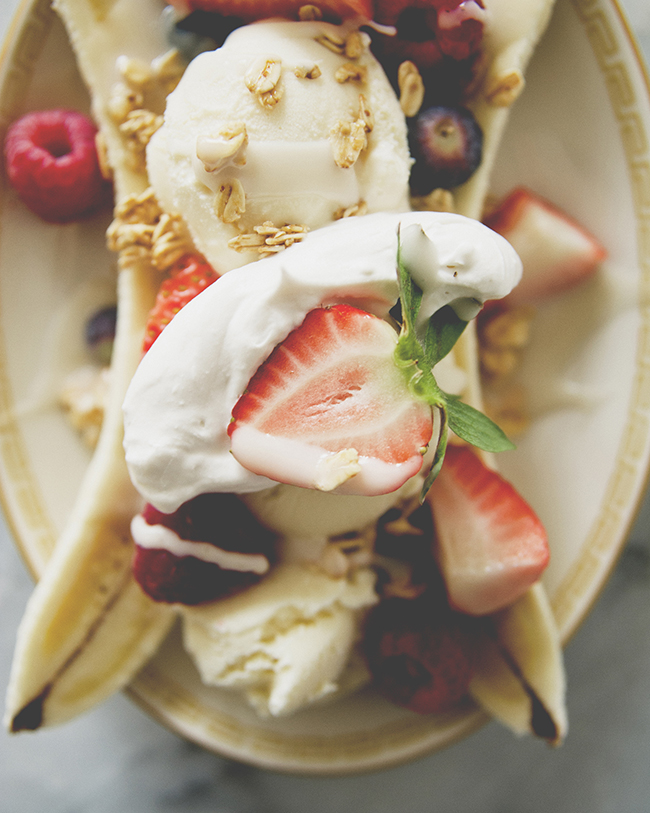 Split a banana in half from top to bottom and place on either side of a bowl.  Fill in the space between your banana slices with fresh berries and ice cream, then top / drizzle / sprinkle with coconut whipped cream, coconut syrup, and homemade granola.

Set the can in the fridge overnight so that the coconut fat solids separate from the coconut water.  Open the can and carefully pour out the thick coconut cream. With an electric whisk, beat the cream, agave, and vanilla extract on high until peaks form, about 2-3 minutes. If not serving immediately, place the bowl of whipped coconut cream in the fridge and then beat it again right before serving it.

Empty out the can of coconut milk into a medium sized pot over high heat.  Bring the coconut milk to a boil and turn down to medium heat, to a rough simmer.  Reduce the coconut milk for about 45 minutes (stirring every now and then to prevent boil over), until it looks like a loose syrup and is about a 1/2 cup in quantity. Take off the heat, add the agave nectar and vanilla extract, and stir to combine.  Cool completely.  Store in a lidded container in the fridge for up to a week.

For 5 cups of Granola

In a large bowl, combine the coconut oil, agave nectar, and vanilla extract.  Add the oats, spices, salt, and almonds, if using. Slowly Mix together until everything is covered.

Spread the granola in an even layer on a rimmed baking pan. Place the rack in the middle of the oven and bake for 40 to 45 minutes, until golden brown, stirring the mixture every 15 minutes. Cool granola completely. Keep in a lidded container at room temp for up to 2 weeks.