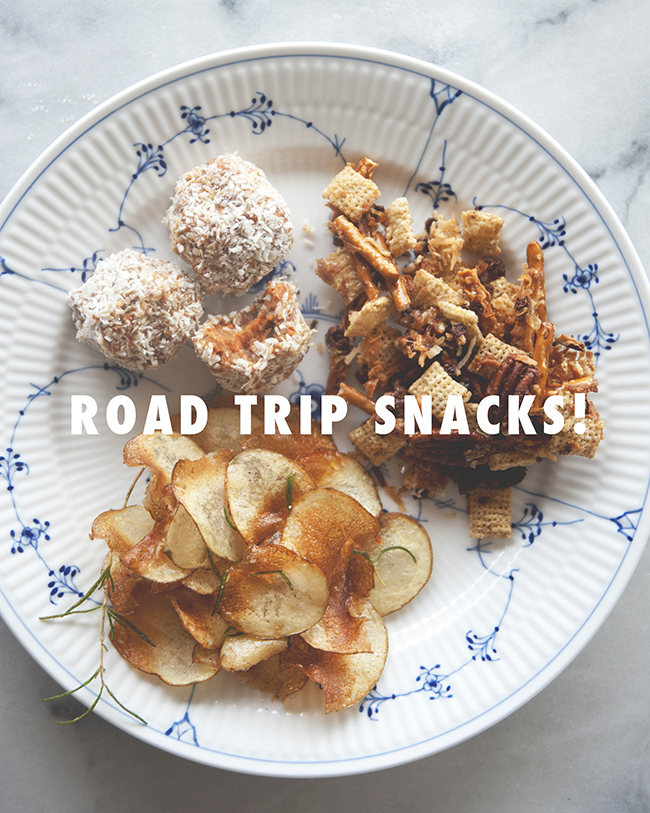 The road trip movie, the romantic comedy, and the “will they or won’t they” movie were all originated by one man, in one movie, Frank Capra, the director of It Happened One Night.

Basically every movie about two opposites who hate each other but you know they’ll end up loving each other started here. Sam and Dianne, Harry and Sally, Kat and Patrick from 10 Things I Hate About You all owe a debt to It Happened One Night.  “Wait a minute, wait a minute, what about Pride and Prejudice or Taming of the Shrew?” You might ask. Well, you have a point, but It Happened One Night gave a distinctly American spin on the concept, and was the first to present it on the big screen. And boy, is it marvelous.

The story is about an heiress, Ellie, on the run from her family because they won’t let her marry the man she loves – an aviator named Westley. Trying to stay under the radar, she trades in her evening gown and furs for a simple day suit, and swaps out the rolls for a bus ticket. She ends up in a seat next to the down-on-his-luck newspaper man, Pete, played by the extremely handsome/witty/awesome Clark Gable, and it’s like oil and water. She looks down on everyone around her, and he needles her endlessly. After a series of mishaps, Pete figures out who she is and aims to write the “big story” that will get him back on top at the paper. Ellie agrees to give him the exclusive if he can get her back to her fiancé and away from her father’s goons.

They hit the road, bonding over hunger, sore feet, and crappy motels. By the end, they’ve become quite an effective team, with Ellie hitching a ride by sticking out her leg when Pete’s thumb proves a bit weak at the job.

In a moment of vulnerability, on either side of a motel bedroom, Ellie gets Pete to open up about love:

Haven’t you ever thought about it at all? It seems to me you, you could make some girl wonderfully happy.

Sure I’ve thought about it. Who hasn’t? If I could ever meet the right sort of girl. Aw, where you gonna find her? Somebody that’s real. Somebody that’s alive. They don’t come that way anymore. Have I ever thought about it? I’ve even been sucker enough to make plans. You know, I saw an island in the Pacific once. I’ve never been able to forget it. That’s where I’d like to take her. She’d have to be the sort of a girl who’d… well, who’d jump in the surf with me and love it as much as I did. You know, nights when you and the moon and the water all become one. You feel you’re part of something big and marvelous. That’s the only place to live… where the stars are so close over your head you feel you could reach up and stir them around. Certainly, I’ve been thinking about it. Boy, if I could ever find a girl who was hungry for those things…

Ellie comes around the corner, tears in her eyes.

I won’t tell you what happens, but there’s a car chase, a last minute wedding, a fight, money lost, love found – it’s all very exciting.

But the heart of the movie is their adventure on the road. This film provides a lovely snapshot into prewar American life, when a busload of strangers start singing “The Man On The Flying Trapeze” out of boredom. It hits a soft spot, and is essential viewing for any lover of movies.

Inspired by Pete and Ellie’s trip, I made road trip snacks for everyone in the car: salty and herbaceous rosemary potato chips, sweet and spicy Chex mix, and for the vaguely healthy among us, raw and vegan carrot cake truffles. Enjoy! 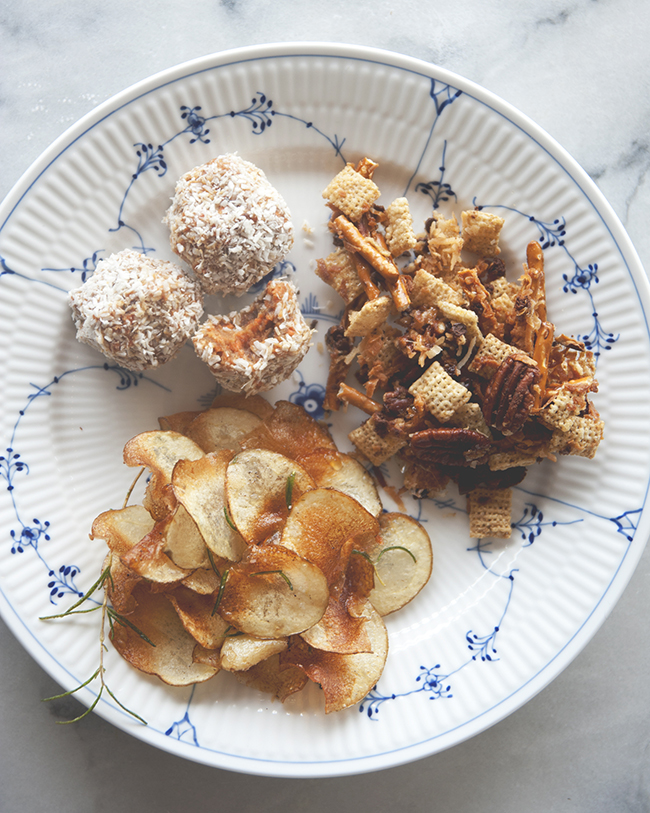 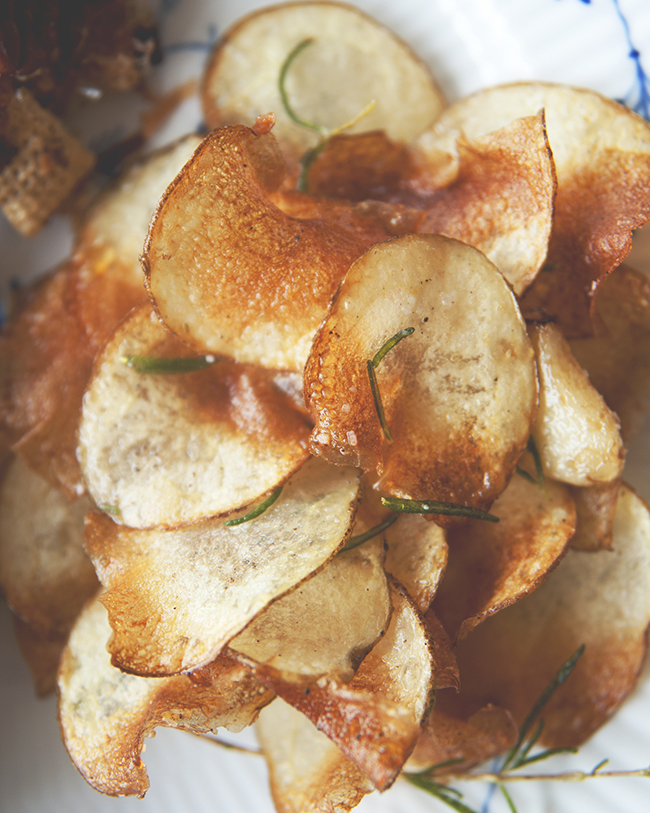 Slice the potatoes paper-thin (you’ll want to use a mandolin for this) and hold them in a medium bowl of ice water with the two tablespoons of salt and vinegar mixed in. Let them soak for at least 30 minutes. Dry them off just before adding to the oil.

Bring the oil up to 375 F in a deep heavy pot and add the slices of potatoes, plus a sprig of rosemary, working in small batches (add a sprig of rosemary with each batch). Stir with tongs to make sure no slices are sticking together. Cook for about 2 minutes, or until the chips are golden brown all over and caramel colored at the edges.

Drain the chips and rosemary on paper towels and sprinkle with salt and pepper while still hot. Let the chips cool (good luck with that) and bag up for later. Or you can enjoy hot! 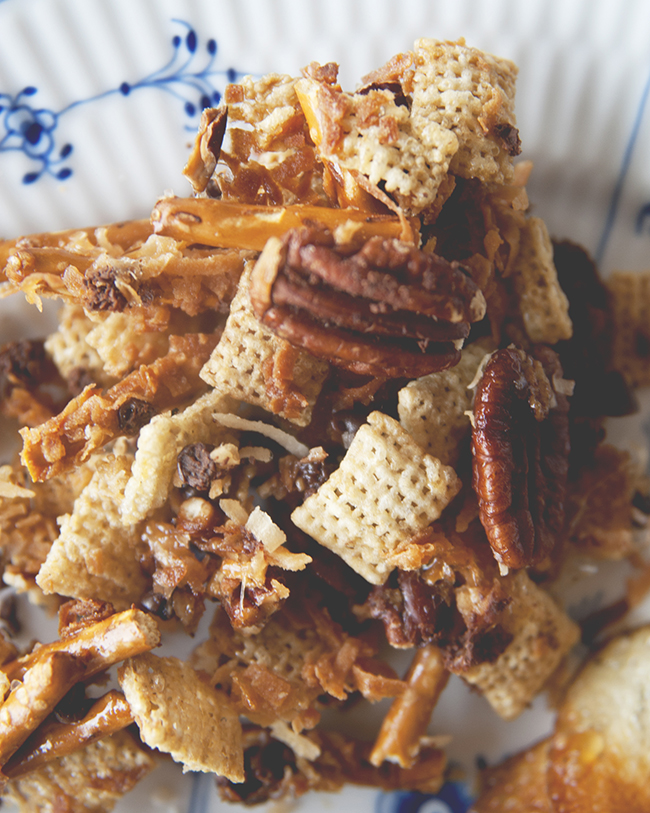 Preheat oven to 300F with rack in center. On a lined sheet pan, combine the rice cereal squares, pecans, pretzel sticks, chocolate chips, and coconut. Pour the sweetened condensed milk over everything, sprinkle with salt and cayenne, and stir to coat. Pour over a greased pan (I used a silicone mat, which makes it super easy to remove everything). Bake 30 minutes (longer if you like it extra toasty). Remove from oven and pour into bags to take on the road. 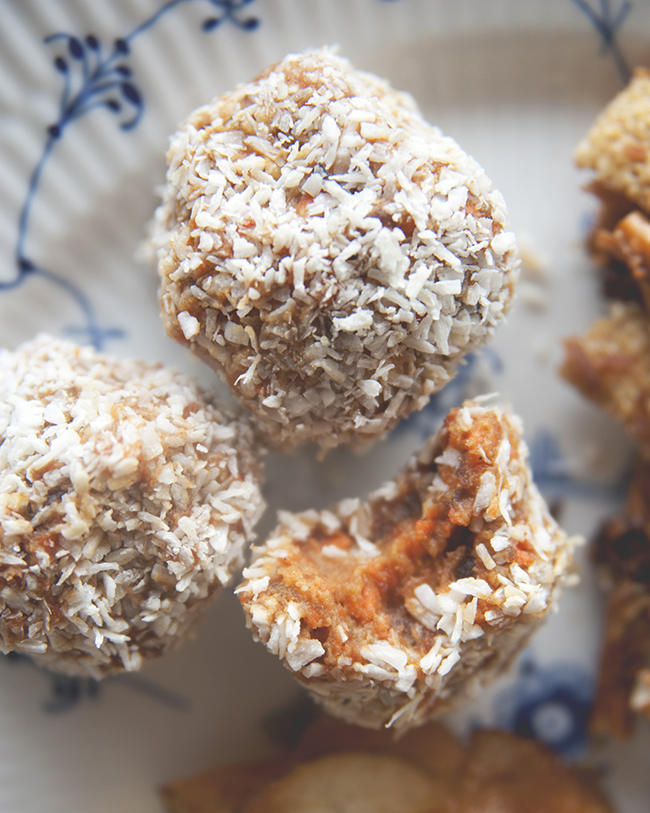 4 or 5 large carrots peeled and cut into large pieces

Combine everything, except for the coconut milk, in a food processor. Pulse until it has a shaggy texture, and everything is about the same size (about half the size of your pinky nail – no big chunks). Pour the mixture into a bowl. Open the can of coconut milk, and into another bowl, scoop out the dense white part and only a few spoonfuls of the liquid. Whisk this together until you have a very thick and smooth coconut cream. Pour a 1/2 cup over the carrot cake mixture, and with your hands roll the mixture into balls. Roll the balls in coconut and place on a lined baking sheet. Refrigerate overnight (or at least a few hours) to set and enjoy!