I’m sure a few of you are shaking your heads, muttering, “That looks NOTHING like a King Cake.” And you’d be right – sort of. New Orleans style King Cake looks a bit like a bundt, is made with a brioche-style dough and is dotted with dried fruit, nuts, and la fève – a trinket – usually in the form of a baby. Then it’s covered in purple, yellow and green frosting (colors which represent justice, power, and faith, respectively), the traditional colors used to celebrate Mardi Gras. Now, I don’t want to step on any Second Line stomping toes, but the Mardi Gras King Cake is a version of a king cake, which has a history going back to Roman festivals.

From the end of December through late January, Romans would celebrate The Saturnalia, an epic series of parties, carnivals, and gifts, plus some fun jumbling of social norms, including the “king for a day” cake. The youngest of the family would pass out slices of cake to slaves, and whoever found a lucky bean in their slice was crowned king. Sound familiar?

This ancient tradition was folded into Christmas celebrations over time.  The cake became a symbol of the Epiphany and the arrival of the Three Magi. Every year on January 6th a King Cake is served, the youngest at the table chooses who gets which slice, and whoever finds la fève, which can sometimes be a baby figurine to represent the baby Jesus, is crowned king for a day.

The Northern French version of a King Cake has very little in common with the dessert so deeply connected to Mardi Gras.  It’s essentially two pieces of pastry, sandwiching almond cream.  It sounded enticingly similar to a gâteau Basque, causing a pavlovian response of drool, contact sugar high, and swooning. But this is Mardi Gras! Making a cake that is a cousin to the classic is a bit like bringing a mac and cheese to an Aussie barbecue, meaning, you’ll only get sideways glances and a little confusion.  What’s a natural pairing in one culture doesn’t necessarily translate to another.

To make my King Cake Mardi Gras ready, I Zulu-fied it.  If you’ve ever been to Mardi Gras, the most coveted “throw” isn’t those beads that seem to proliferate with the propensity of mushrooms in a basement, it’s the golden nugget – a gold painted coconut handed out by the Krewe of Zulu since the turn of the last century.  Catch one of these, and you are lucky indeed.

So I give you: Mode Zulu Galette de Rois.  A delicious combination of history and Mardi Gras, sandwiched between two slices of flakey pastry. 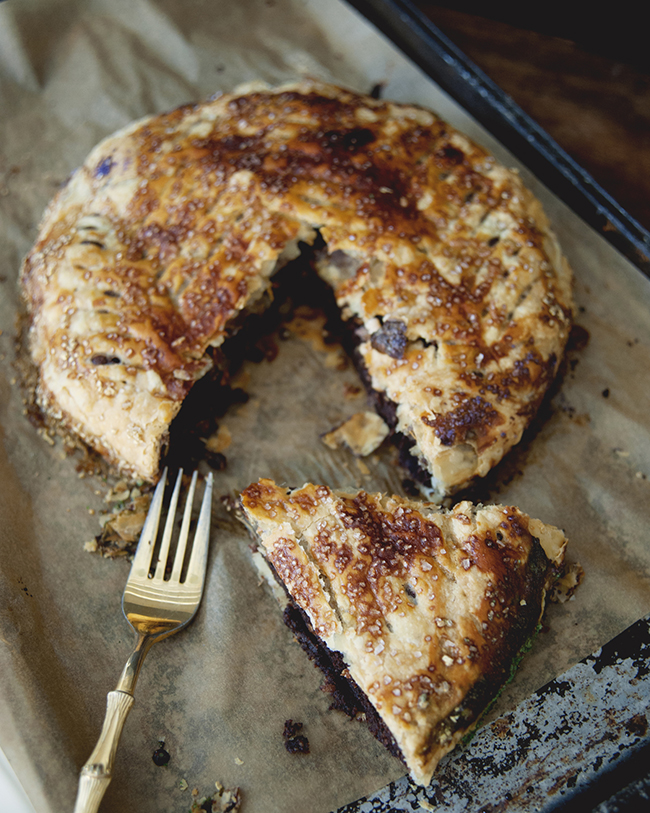 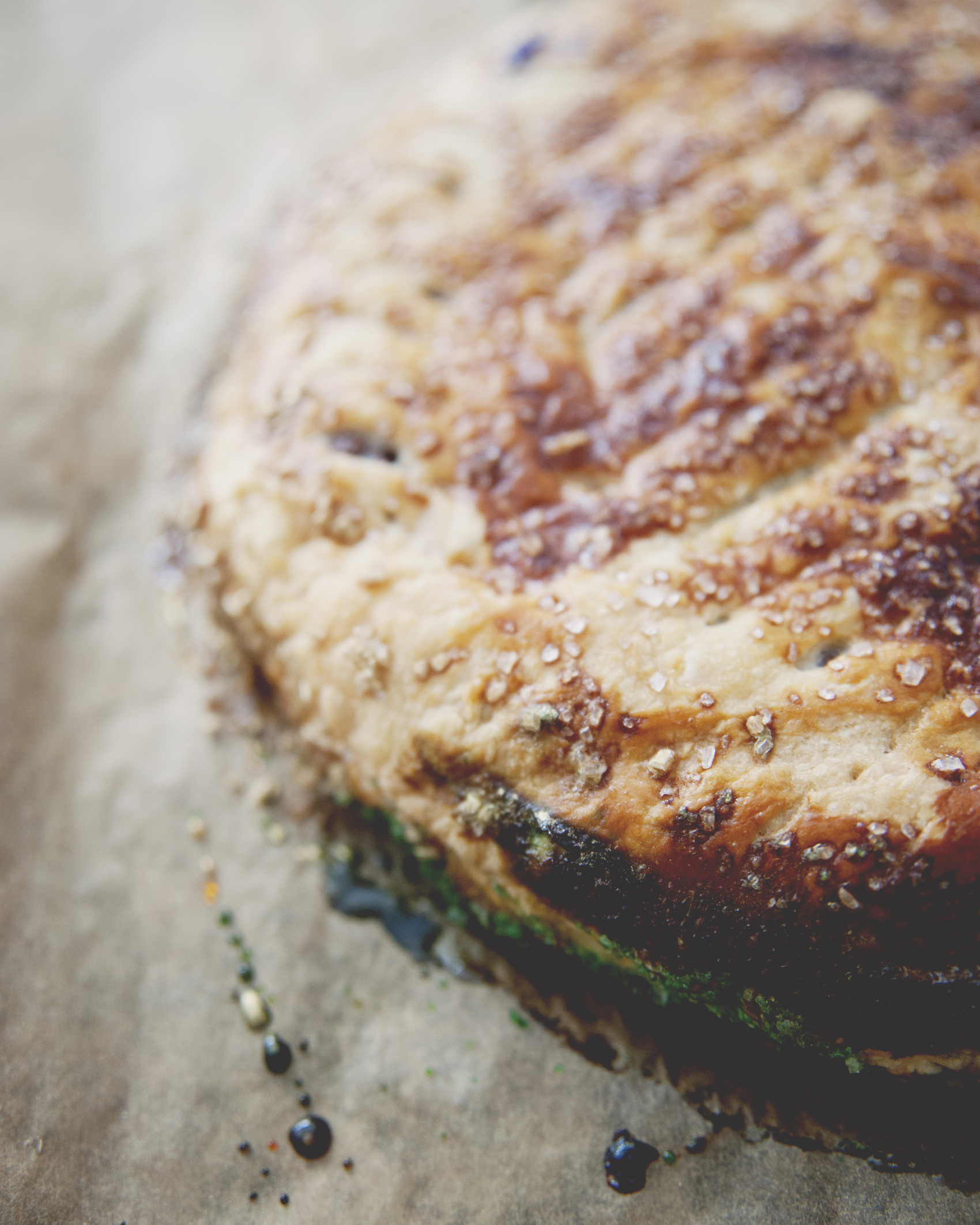 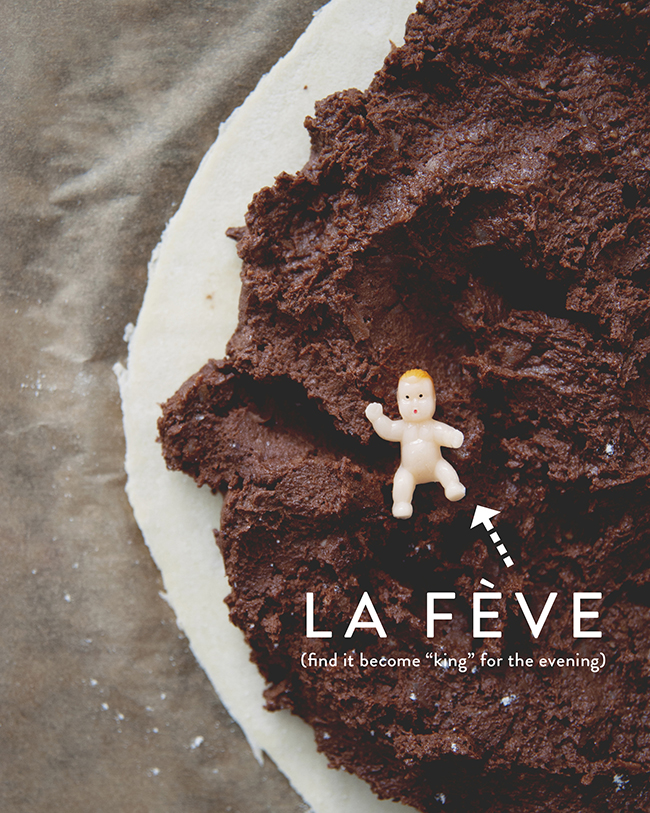 To make the filling, in a medium bowl, or in the bowl of a stand mixer, combine the almond meal, sugar, and salt on low speed.  Add the the butter and mix until it’s completely incorporated. Stir in the yolks one at a time, along with the vanilla extract, rum, melted chocolate, and coconut. Don’t worry if it looks a little lumpy. Cover with plastic wrap and chill in the fridge for at least 30 minutes.

Line a baking sheet with parchment paper or a silicon mat. On lightly floured surface, roll one piece of puff pastry until it’s wide enough to cut out a 10 inch circle. I cut mine a little wider because the pastry likes to shrink back a bit after you slice into it. Using a dinner plate or cake pan as a template, trim the dough into circle. Place the dough on the baking sheet and cover it with plastic wrap while you roll out the second sheet of puff pastry in the same fashion, and lay it on top. Chill the dough in the fridge for thirty minutes.

Brush water around the exposed edge of the dough then place the other circle of dough on top of the galette and press down to seal the edges very well. Chill again for 30 minutes (or overnight if you’re making it ahead) to make the decoration easier.

To bake the galette, preheat the oven to 375ºF.  Flute the sides of the dough by pinching the dough around your finger (or you can just roll it to seal) and use a paring knife to create a houndstooth design on top. Whisk together the egg yolk with the milk and brush it evenly over the top – avoid getting the glaze on the sides so it will rise evenly. I then sprinkled mine with a variety of glittery sanding sugar to give it that Mardi Gras flare.

Bake for 30 minutes, or until the galette golden brown all over. Remove from the oven and slide the galette off the baking sheet and onto a cooling rack. Don’t worry if it deflates a bit, it’s supposed to do that. Serve warm or at room temperature with heaping scoops of vanilla ice cream. And careful! Don’t bite down on la fève too hard!