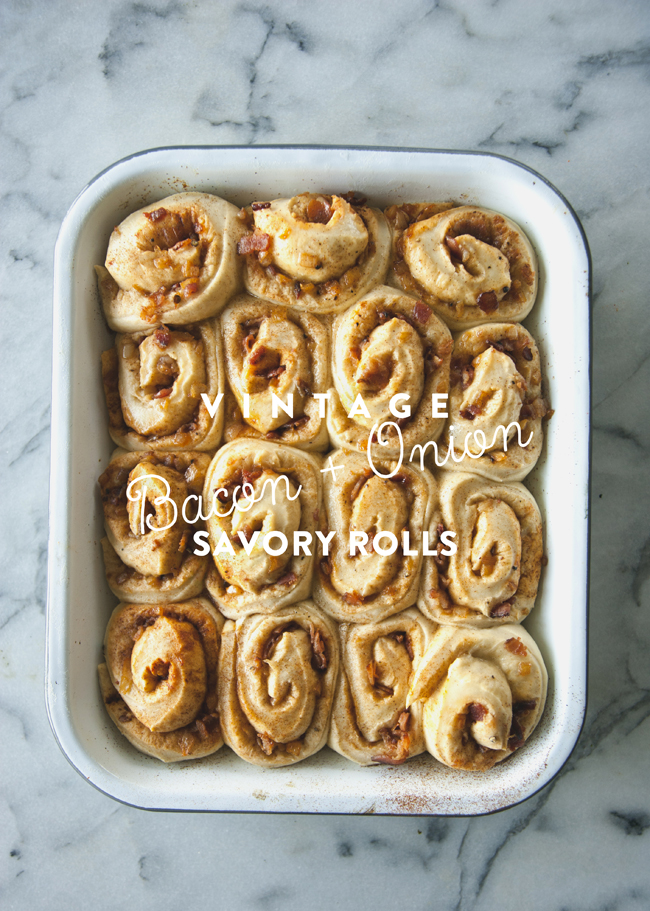 Chef Louis P. DeGouy (pronounced de-gooey) is one of my favorites from the 1940s. He wrote thousands and thousands of recipes, and honestly, almost every one of them is intriguing. His father studied under the great Escoffier and cooked for Emperor Franz Josef of Austria, while Louis cooked for grand hotels across Europe and for magnates in the states. He would later become one of the founders of Gourmet Magazine.

One of the best descriptions of his style is from the dust jacket of his Gold Cookbook – which has become one of my immediate go-to tomes when I’m in need of inspiration: “He writes with infectious enthusiasm for his subject, salting the book with anecdotes and amusing tales on the origin and the history of philosophy and poetry about the timeless art of cooking and eating.”

This recipe for savory bacon onion rolls is from DeGouy’s baking cookbook, “The Bread Tray.” I’ve started collecting all of his books, though some are a little harder to track down than others, and each is filled with wonderful recipes like this one. I updated the measurements a bit for the modern kitchen, and lightly rendered the bacon and caramelized the onion to create a deeper flavor. But these lovely rolls – which I didn’t realize until I was almost finished would look like savory cinnamon rolls – are perfect with soup on a cold evening. Make sure to serve them with lots of melted butter and a pinch of salt – it makes them particularly delicious. 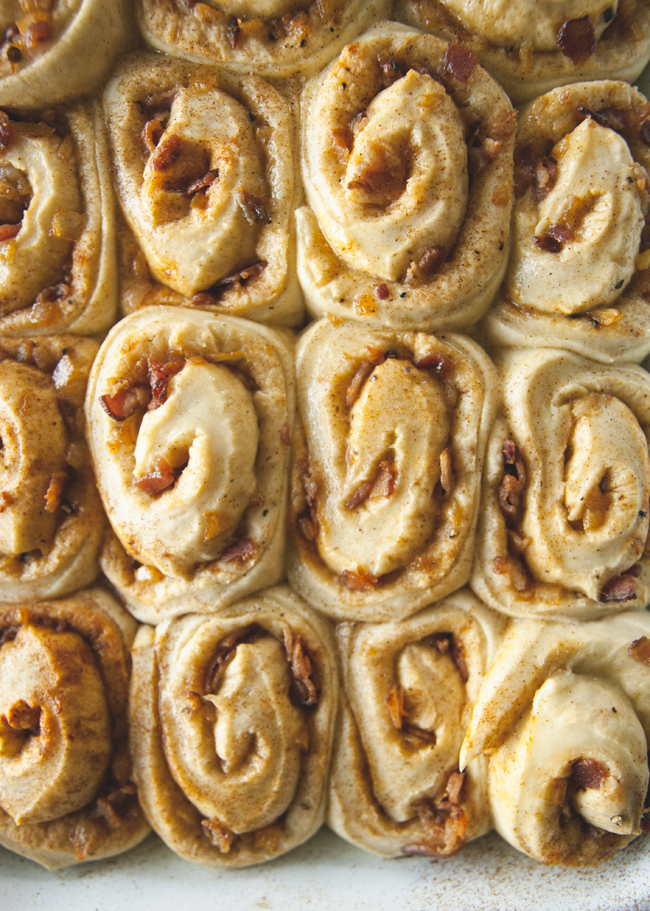 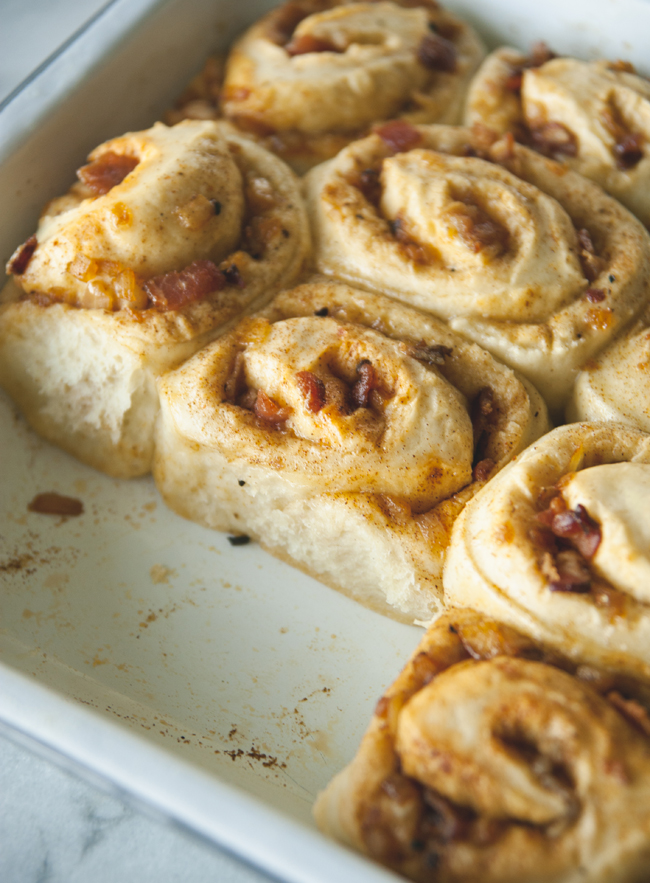 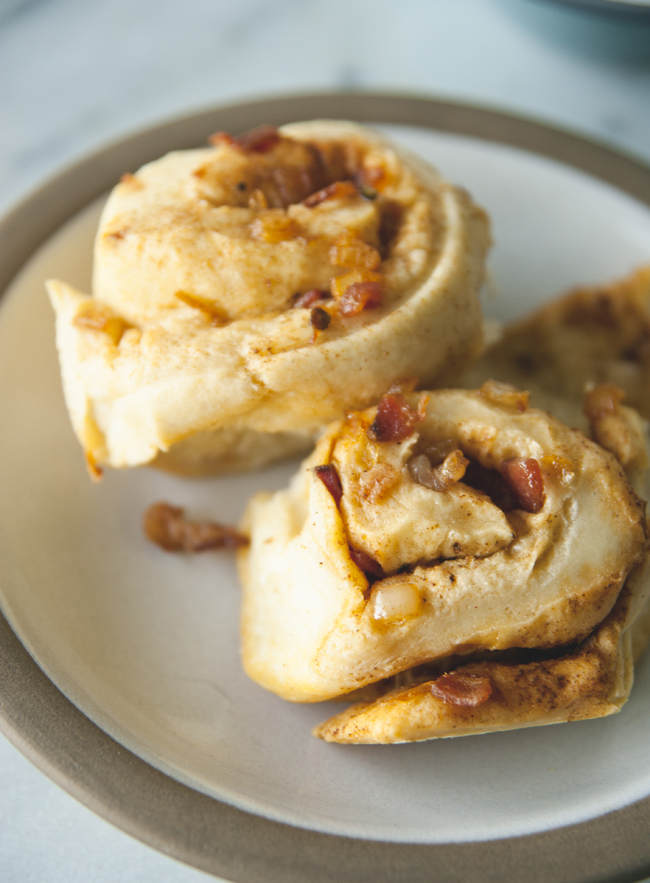 In mixing bowl, dissolve sugar, salt, and butter in scalded milk, cool to lukewarm and add the yeast. Stir lightly to combine and let it stand for 5 minutes. It should start bubbling and foaming a bit.

Stir in 4 1/2 cups sifted bread flour and mix until very smooth. While the dough is mixing on medium speed, add the eggs one at a time, followed by the cardamom add remaining flour. Knead for 15 minutes, or until elastic. Place in a large, greased container and let it rise in a warm place until doubled in volume.

Meanwhile, in a large pan over medium head, cook the bacon until just crisp, and pour into a bowl, saving a few tablespoons of fat in the pan. Add the onions and a touch of salt, and saute over medium heat until dark and caramelized, about 20 minutes. Add the paprika and black pepper. Stir with the bacon and set aside to cool.

Turn out onto a floured surface, knead for a minute, and roll out to about 1/2 inch thick. Cut into two rectangles. Spread the bacon and onion mixture over each rectangle, and roll the long side of the dough, forming a log. Cut the log into 1 inch thick slices. The slices should look like a savory cinnamon roll.Repeat with other half of dough.

Place the rolls into two 9 x 13 inch baking dishes uncrowded (you’ll probably have some left over, so you may need another baking dish). Let the rolls rest until doubled in volume.

Brush with coffee and then melted butter. Bake for 30 minutes in a 325F oven, until puffed and golden brown. Before serving, brush with butter again, and serve warm.