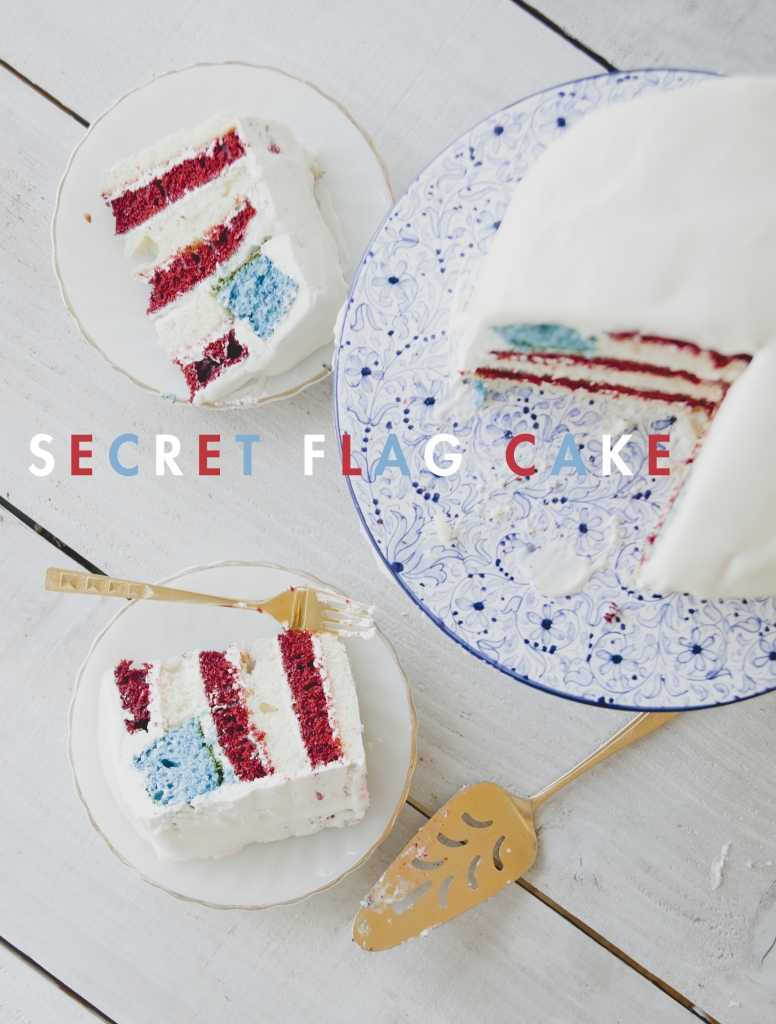 Flag cakes dotted with berries are a mainstay on the Fourth of July barbecue spread, so to try something different this year, I went for a secret flag cake. On the outside, it’s an unassuming white cake – simple and clean, smooth with fluffy vanilla Italian buttercream, but inside it’s a John Phillip Sousa marching band. The key to this cake is a thick layer of frosting on the exterior, as there isn’t much frosting between the layers. A bit of patience with the assembly wouldn’t hurt as well. Enjoy, and Happy Fourth! 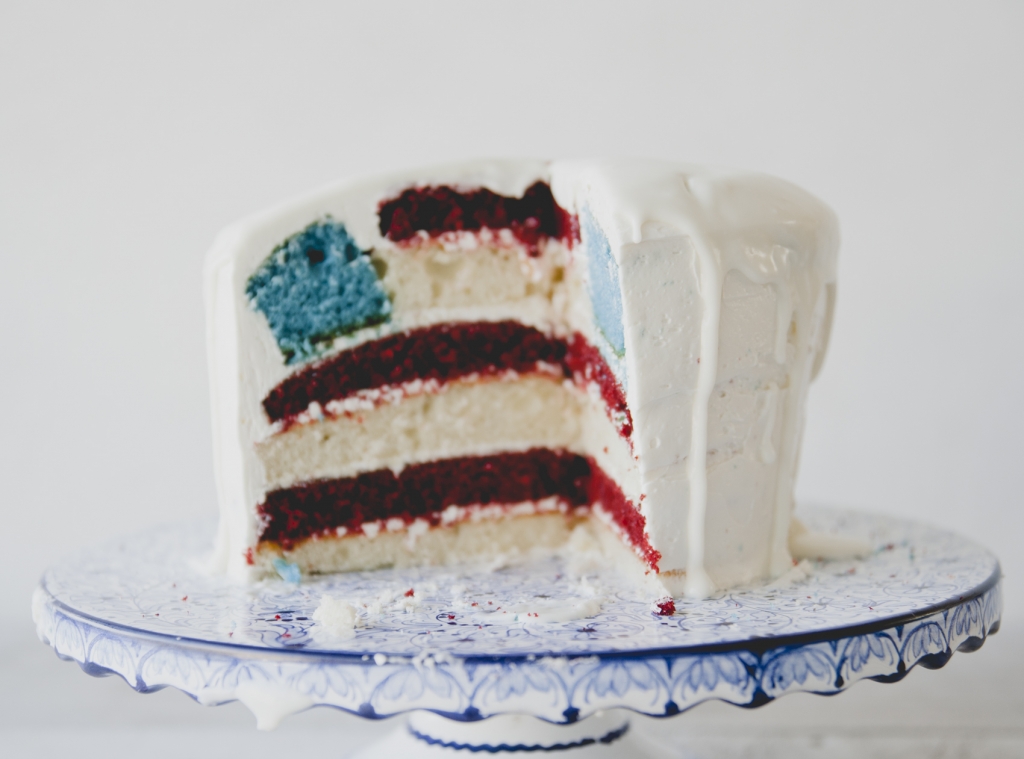 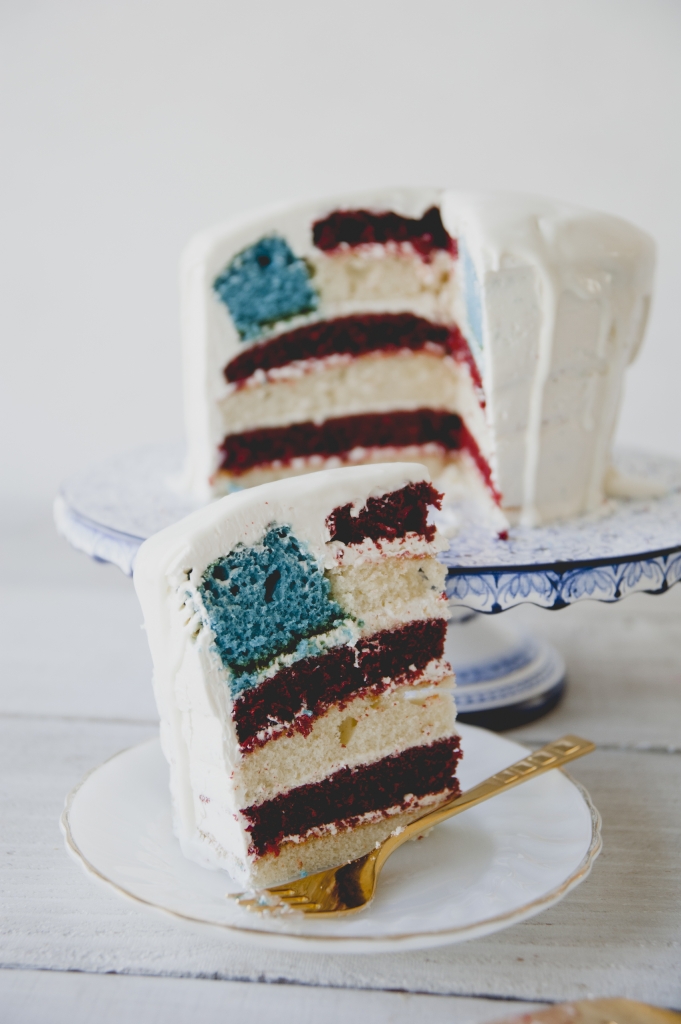 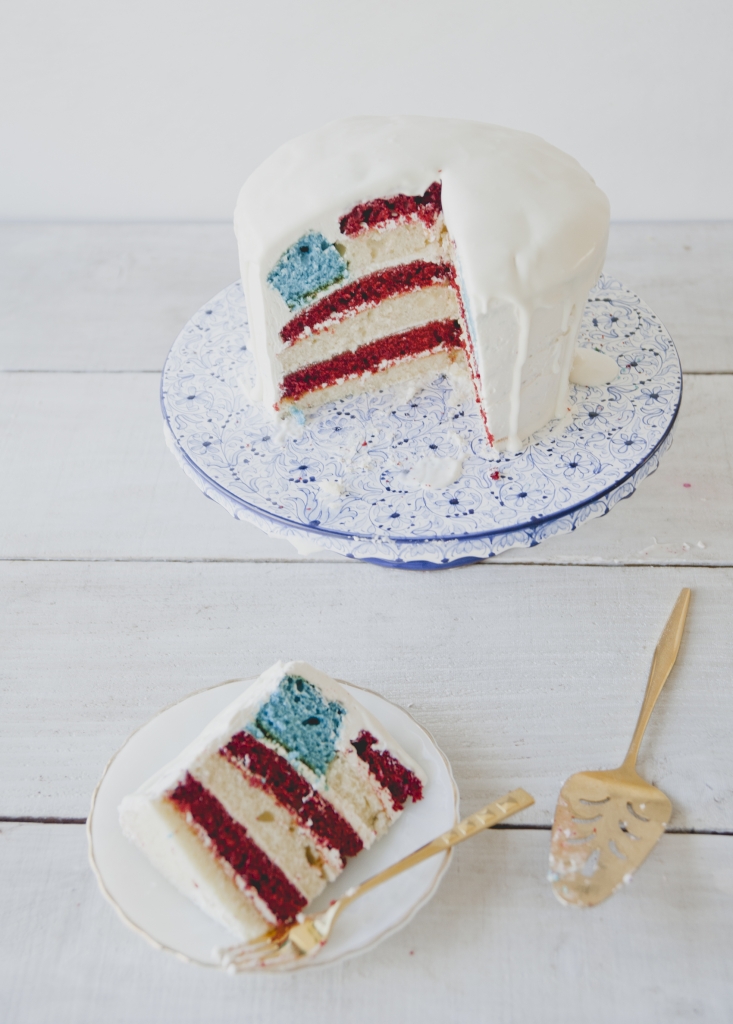 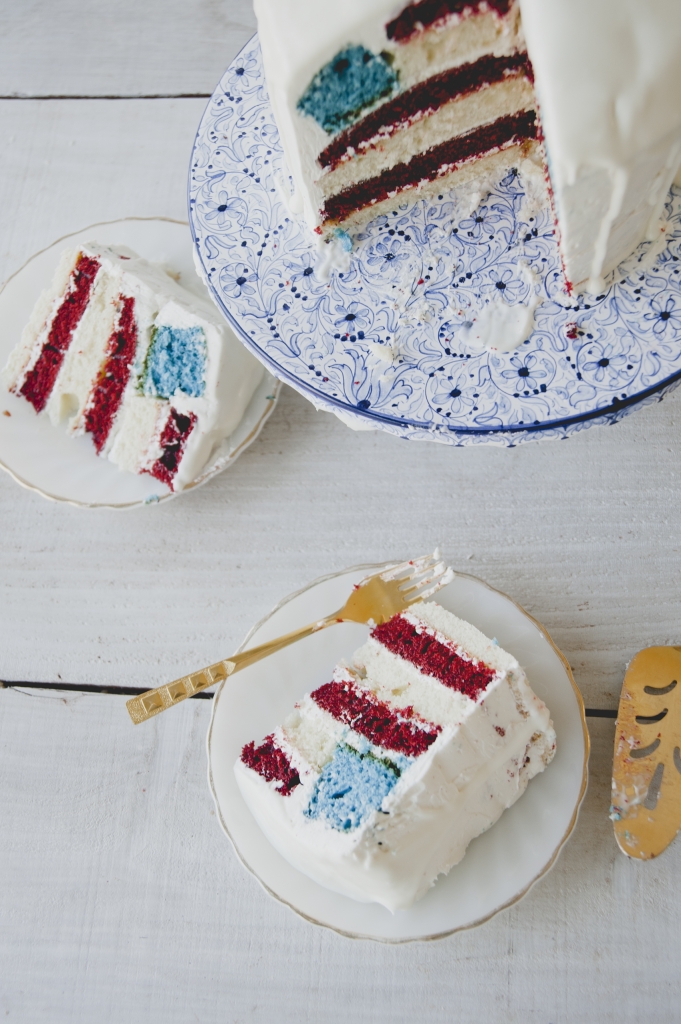 Slice the white cakes and red cakes in half, horizontally, creating thinner layers. Stack together the blue cake and one layer each of white cake and red cake. Using a small saucer as a guide, cut a hole out of the center of the cakes with a knife. Set aside.

To assemble the cake, place a white layer on the bottom of a cake platter, and top with a thin layer of buttercream. Add a red layer, a thin layer of buttercream, and repeat again until you have four layers of cake and buttercream. Add the large, outer piece of blue cake, with the center removed, on top of the cake layers. Take the two smaller pieces of red cake and white cake (the interior center piece that was cut out) and sandwich together with buttercream (red on top, white on bottom). Put this sandwich inside the gap in the blue cake layer. You should have a solid cake.

Spread with buttercream over the entire cake, smoothing over. Pour the royal icing on top, letting it drip on the sides.

pinch of cream of tartar

In a small saucepan over medium heat, bring sugar and 2/3 cup water to a boil. Continue boiling until syrup reaches 238 degrees on a candy thermometer (soft-ball stage).

Meanwhile, place egg whites in the bowl of a standing mixer fitted with the whisk attachment, and beat on low speed until foamy. Add cream of tartar, and beat on medium-high speed until stiff but not dry; do not over beat.

With mixer running, add syrup to whites in a stream, beating on high speed until no longer steaming, about 3 minutes. Add butter bit by bit, beating until spreadable, 3 to 5 minutes; beat in vanilla, and salt. If frosting curdles, keep beating until smooth. Sprinkle in cake crumbs, if you like, to create a confetti effect.

Combine ingredients, and stir until a thick sauce is created. Add more milk or powdered sugar to create desired texture.