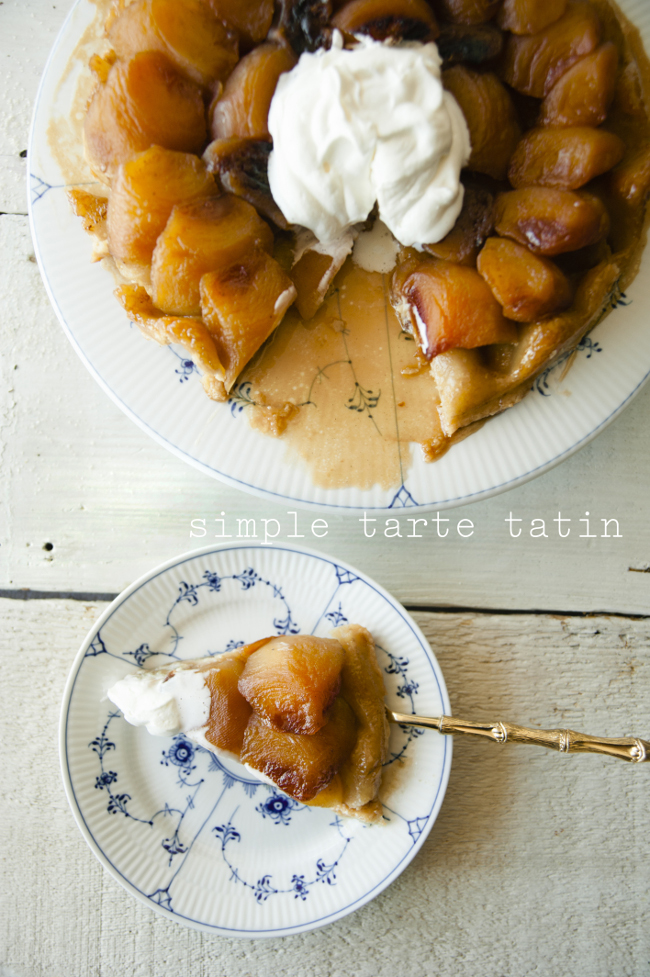 Tarte tatin is by far one of my favorite winter desserts. The story behind it is a delicious mistake, not unlike how chocolate chip cookies were created. Two sisters owned an inn, about 100 miles south of Paris, and one of them intended to make an apple pie. But she was distracted, and accidentally burnt the sugar and butter. She then did what any busy home cook would do – slap a pie crust on it and hope for the best.  The burnt mistake became the trademark for the little inn, and the owner of Maxim’s – one of Paris’s chicest clubs – became obsessed with the delicious recipe. He put it on his own menu, naming it after the sisters at the inn – Tarte Tatin.

The reference to Maxim’s made me think of one of my favorite films from the golden age of hollywood, Gigi. With music by the fabulous Lerner and Lowe, directed by Vinvent Minelli, and based on a book by the always absorbing Colette – it’s fantastic. It also has a fashion show, which honestly, anytime there’s a vintage show, I’m game. The climax of the film centers on a scene in Maxim’s, and I don’t know, if you love movie musicals, it’s a must watch. There’s also an entire song dedicated to champagne, which means they’re my kind of people. Enjoy! 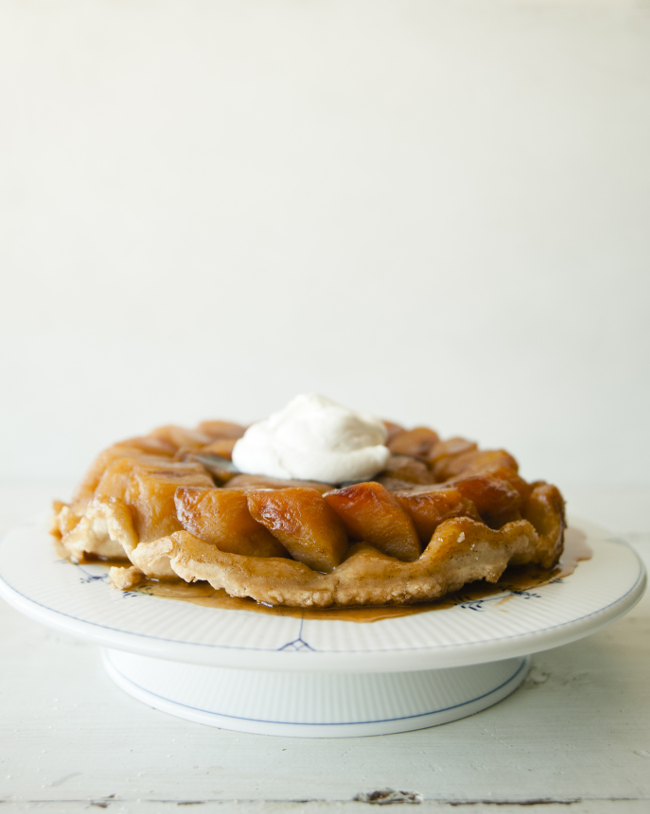 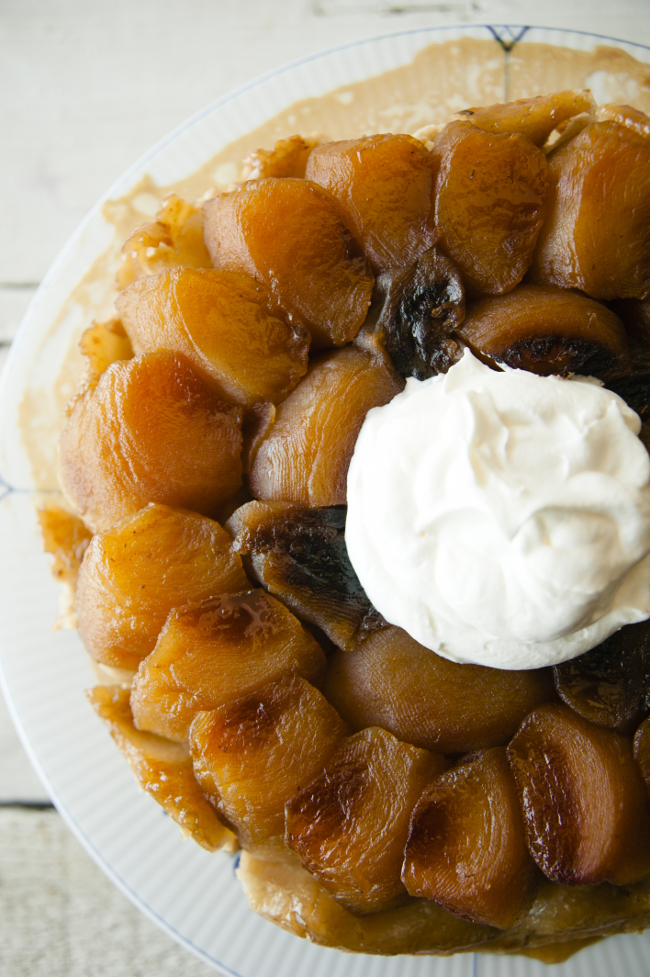 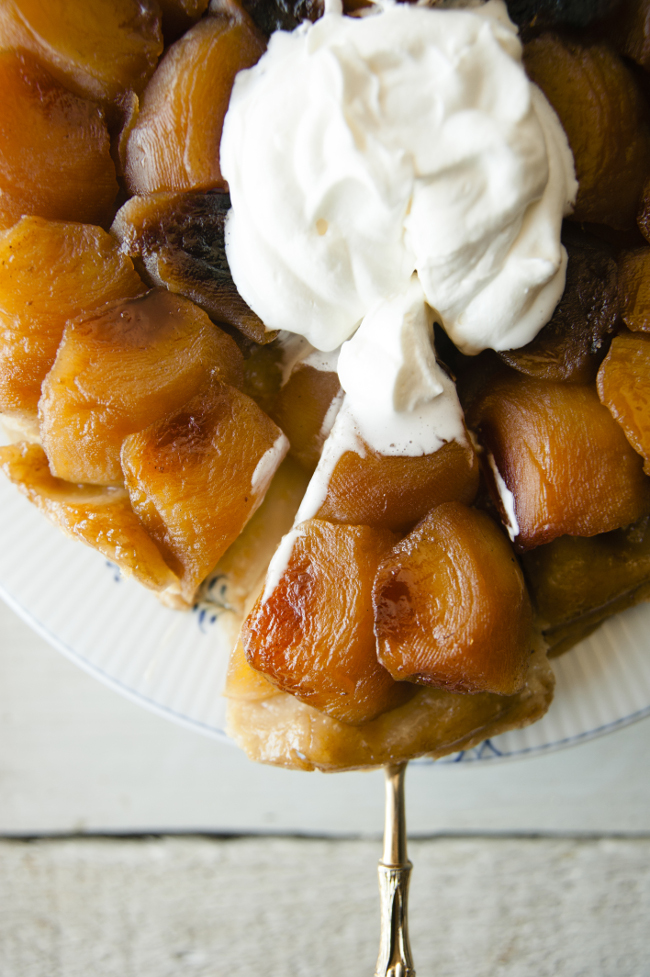 For one 10-inch Skillet

4 four-inch wide saute pans, preferably with deep side (or one 10 inch skillet)

10-12 small pink lady apples (mine were about 2 inches diameter), any high acid firm apple with a hint of sweetness, peeled, cored, and halved

This is a double crust recipe, so you will only be using one for the tarte tatin.  Refrigerate or freeze the other one for future use

For the pie crust, in a food processor or quickly using your fingertips, combine the flour, sugar, salt and butter until the chunks of butter are broken down to the size of peas and the flour feels like wet sand. Add the first 1/4 cup of water and mix until the dough comes together easily. It’s too dry if it immediately clumps apart. Add two tablespoons of water at a time, you can always add more water but not more flour, so careful not to add too much! Bring the dough into two balls and plop them on top of two sheets of plastic wrap. Loosely wrap up the ball and press down, smooshing the ball into a disc about an inch thick. Pop them in the fridge for 30 minutes while you busy yourself with the other stuff.

Preheat oven to 400 F. Stir together the sugar and vanilla seeds. Pat down the butter onto the pans and sprinkle the vanilla sugar on top.  Place the apple pieces vertically in the pan, snaking in a circle along the edge.  Keep repeating until the whole pan is full. Over a medium flame, place the pan for 20 to 30 minutes, until the butter, sugar, and apples have created a golden brown caramel.  It’s ok if it’s a little patchy. Let it cool for a few minutes and roll the chilled pie dough neatly onto the dish, and roll the crust inside the edge of the pan. Put in the oven and bake for about 15 minutes (20 if making in one large pan), or until the apples are bubbling and the crust is golden brown. Bring to room temp (if you can wait) and flip onto a serving dish. Serve with whipped cream.