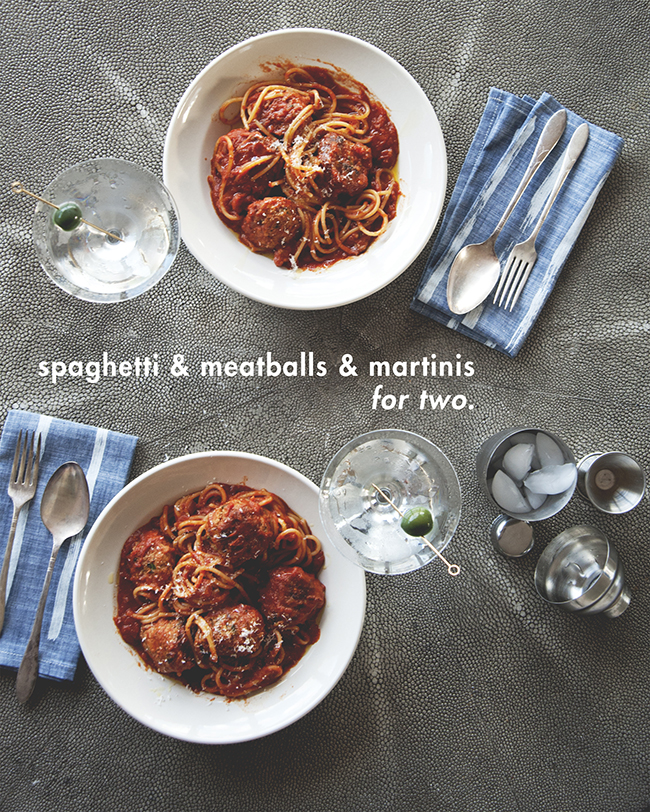 Movie-wise, romance-wise, comedy-wise, and cookie-wise, The Apartment is one of the best movies ever made. Billy Wilder and IAL Diamond are at their sharp, witty best with the dialog. The scenes just sizzle and snap until you realize the camera hasn’t moved for a full minute and here you are still entirely engrossed.

The story follows your classic everyman underdog, C.C. Baxter, who would be an insufferable invertebrate if it wasn’t for Jack Lemmon’s performance. Baxter has found the perfect way to hasten his climb up the corporate ladder: lending out his apartment as a love nest for the executives. He leaves them a key, then works late while they party with their secretaries. But then things get complicated. Baxter has a crush on Fran, the charming elevator girl played by Shirley MacLaine, who, unknown to baxter, happens to be tangled up with Mr. Sheldrake, the head of human resources. Sheldrake gets in on Baxter’s little key swap, taking Fran to Baxter’s apartment for an intimate Christmas party. On the heels of promising to leave his wife for Fran yet again, Sheldrake forgets to get her a Christmas present and offers her $100 instead. He slinks out, leaving Fran to break down and consume a bottle of vodka and sleeping pills.  Who discovers her but Baxter himself, who was wallowing in self pity and martinis at the bar down the street. I’m realizing that this sounds incredibly dark and grim, but somehow Wilder manages to balance the gravity of the situation with bubbly and bright dialogue. Fran makes it through the night, and recuperates over the weekend in the apartment with Baxter nursing her.

One of the sweetest moments is when Baxter prepares a dinner for two. He strains his spaghetti with a tennis racket, stirs up some dry martinis, and has he’s lighting candles, he says:

Oh, no. Sometimes I have dinner

with Ed Sullivan, sometimes with Dinah Shore or Perry Como —

the other night I had dinner with Mae West —

of course, she was much younger then.

They didn’t get to have dinner that night. I’m not going to give away the ending, but it’s a good one. I love the redemptive spirit of this movie, and how everyone grows a little, and becomes a little bit better by the end. Also, Baxter and Fran have such a friendly, low key dynamic that seems to missing from most romances of that time.  The drama is all around them, but inside their relationship it’s all just banter and calm, quiet moments.

So for Valentine’s day this year, I’m going to recommend that you make your sweetheart the dinner-for-two that Baxter and Fran should’ve had. Spaghetti with Meatballs and very Dry Martinis. xoxo 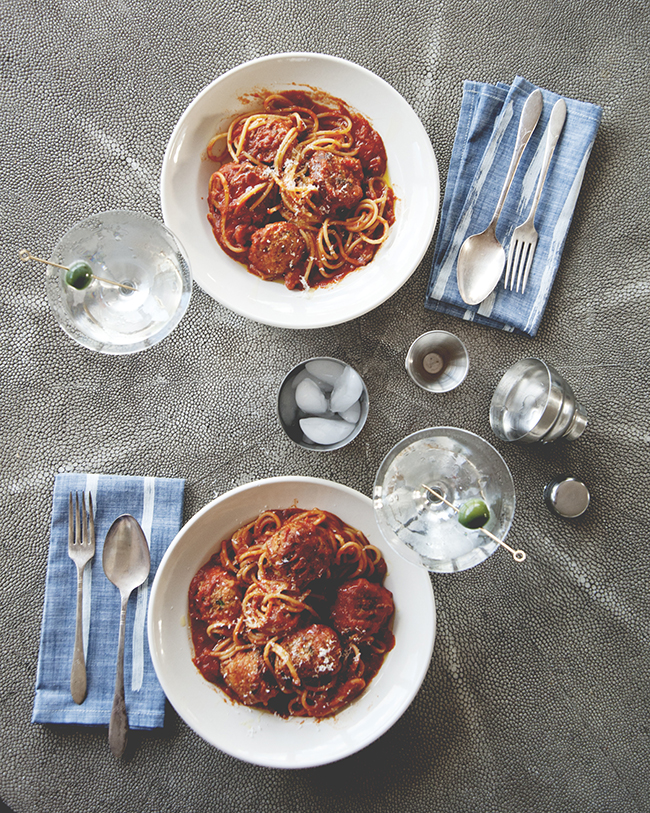 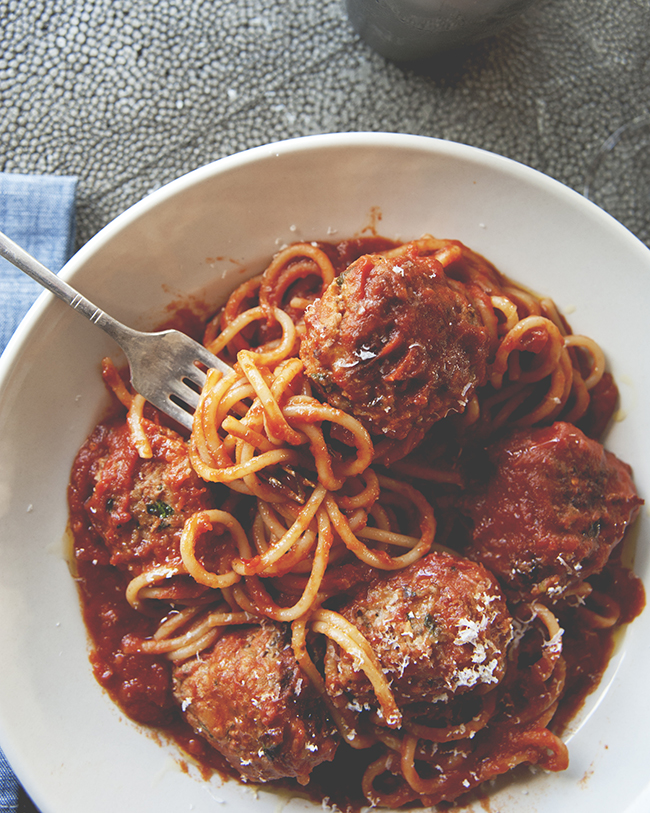 crusty baguette, sliced on the bias to serve

In a large bowl, combine the breadcrumbs and milk, and let them sit until the breadcrumbs absorb the liquid (about 5 minutes).  Then add the remaining ingredients. Mix well then form into approximately 18 1 1/2-inch round meatballs. Set on a tray in the fridge to firm up while you prepare the arrabiata sauce.

In a large, deep skillet, heat oil over medium-high. Add garlic and red-pepper flakes; cook until garlic is fragrant and beginning to brown, about 1 minute. Add onions, cooking for about 5 minutes until just turning translucent. Add wine, cooke for a minute, then add the tomato sauce.  Simmer over medium heat, stirring occasionally, until slightly thickened, 8 to 10 minutes. I prefer a smoother textured sauce, so I puree mine, then return it to the skillet.

Set a large saute pan over high heat and add vegetable oil. When very hot, brown meatballs all over, about 2-3 minutes per side. Use a slotted spoon to transfer meatballs to the skillet filled with arrabiata and nestle them in sauce. Cover slightly with a lid and simmer for 10 minutes until very tender. 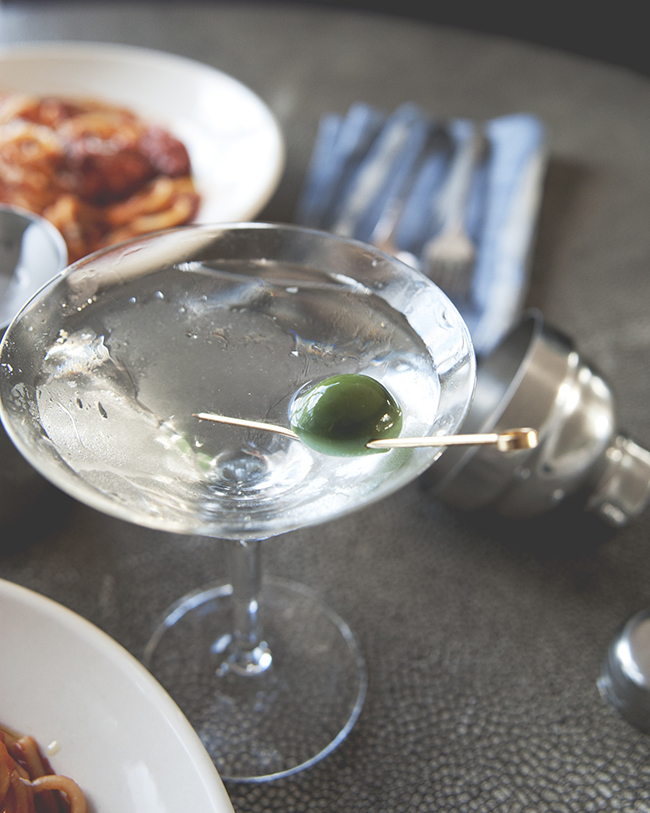 The martini for the martini purists. Based on the ideal from Bernard DeVoto’s lyrical and facetiously toned book on America’s greatest gifts to the world (hint: whiskey and the martini), The Hour, this martini reminds us that:

“We are a pious people but a proud one too, aware of a noble lineage and a great inheritance. Let us candidly admit that there are shameful blemishes on the American past, of which by far the worst is rum. Nevertheless we have improved man’s lot and enriched his civilization with rye, bourbon, and the martini cocktail, In all history has any other nation done so much? Not by two-thirds.”

To make one cocktail, though if you want to make a batch, just multiply the recipe and mix in a pitcher, “fill the glass with ice, whirl it till dew forms on the glass, pour out the melt, put in another handful of ice. Then as swiftly as possible pour in the gin and vermouth, at once bring the mixture as close to the freezing point of alcohol as can be reached outside the laboratory, and pour out the martinis.” To finish the cocktail with a little extra DeVoto flare, he recommends squeezing a bit of lemon peel over the glass and if you like, pop it in. Enjoy in a chilled glass immediately.