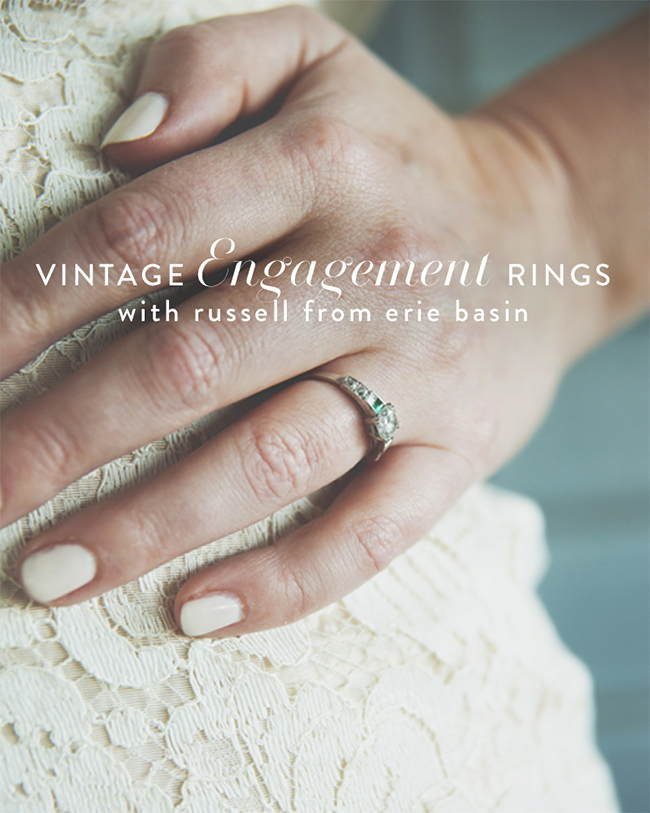 Erie Basin (blog.eriebasin.com) has been one of my daily check-ins for a while now.  Every day, I click over to their tumblr and just scroll through all the pretty. Art deco tennis bracelets, Victorian oddities, Edwardian Egyptology inspired necklaces, and sometimes the perfect engagement ring.

My first memory of Craig was in a small seminar class in college.  I started explaining the thesis of a paper I had written for the class (it was about how economy is a reflection of hope in dire circumstances.  If you’re investing, you believe in a tomorrow. Pretty nerdy stuff), and I saw his ears pop up from across the room. He asked me if I wanted to write papers with him and that’s what started our long, unrequited courtship. Craig had a big, really poorly hidden crush on me, and I was completely intimidated by him.  He was just so intelligent and passionate, I was always overwhelmed by him as a friend. Six years and a few relationships later, Craig and I reconnected.  One day he came over at about 2 pm to catch up, and then that turned into dinner and a movie, and then talking until 2 am, then our first kiss, and then on our fifth date he accidentally told me he wanted to marry me. Eighteen months later, I said yes.

We didn’t really start a “ring hunt,” it sort of happened upon us. I was scrolling through the Erie Basin site, like you do, and all of a sudden I started noticing the engagement rings. I found myself gravitating towards a few, and sitting there on the couch, drinking whiskey in sweatpants, Craig and I decided to get one.

Russell, the owner of Erie Basin, was so sweet and accommodating, sending us a few rings to try out. I fell in love with a deco ring with just a teaspoon of emerald, but the shape didn’t work for me. Then I found a ring with the perfect shape, but I couldn’t shake my love for the emerald. Craig scurried off, and dozens of emails with Russell later, he had my perfect franken-ring: a petite, art deco ring with just a little bit of emerald.

Now that the ring is firmly on my finger, I thought it would be fun to pick Russell’s brain on what makes Erie Basin so special and tips for couples looking to purchase a vintage ring.

Thank you for the beautiful work again, Russell! xoxo 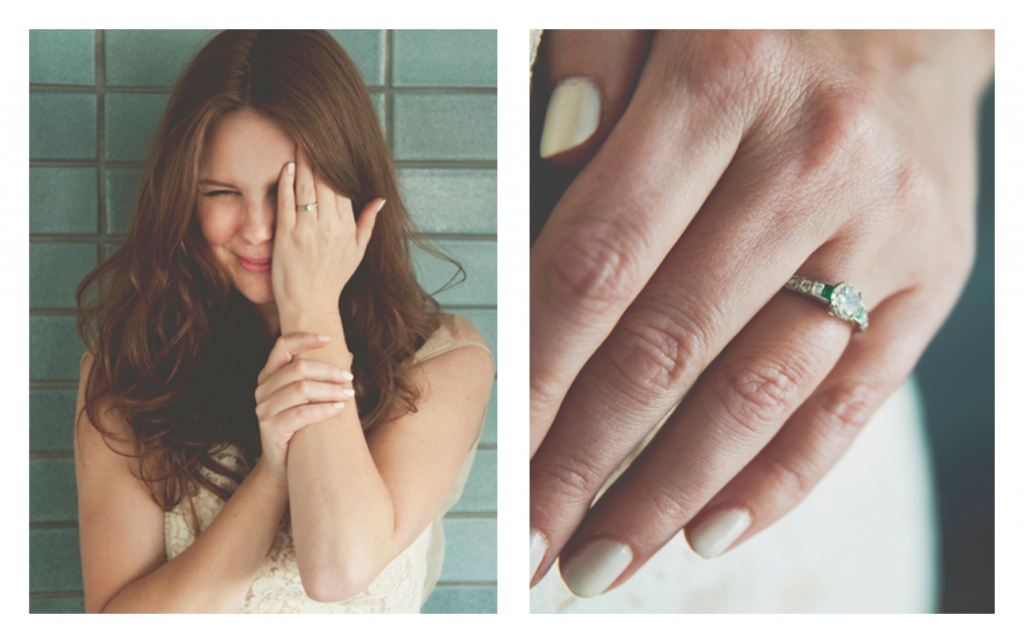 How would you describe the Erie Basin aesthetic, and how did you come to curate it? Have you always loved objects that fit into these eras, or did your taste evolve into it?

I like to think our aesthetic is constantly evolving, and always attempting to reflect current tastes. When we first opened in 2006, we had two cases with just black jewelry (a reflection of the goth trend that ran through the mid 2000’s), and now there’s lots and lots of color. But there is some consistency to our aesthetic over the last 8 years. I prefer things that aren’t overly fussy, and pieces that feel a little anachronistic— especially things that seem surprisingly modern or futuristic for the time they were made.

What was your journey to becoming an antique dealer, especially one specializing in antique jewelry?

I grew up in an old house, always around antiques, so I think it’s in my blood. In college in rural Ohio I spent a lot of time in antique shops, and thought about getting into the business when I moved to New York in 2003. At the time there didn’t seem to be any young people getting into the business, and I thought it would be interesting to take a different approach. I originally wanted to deal in antique furniture that appealed to people of my generation, but I quickly realized what a pain it is to move and store furniture. Over time I focused on smaller and smaller things until it was almost just jewelry. Jewelry’s convenient, but as it turns out it’s also way more exciting than furniture.

What grabs you when you’re hunting for objects?

I guess some of the same things as when I’m looking for jewelry, but when it comes to objects, I appreciate things that are a little folky, or even homemade. There’s something so personal about folk art, and imagining the maker and their story makes for a very captivating object. A good recent example. 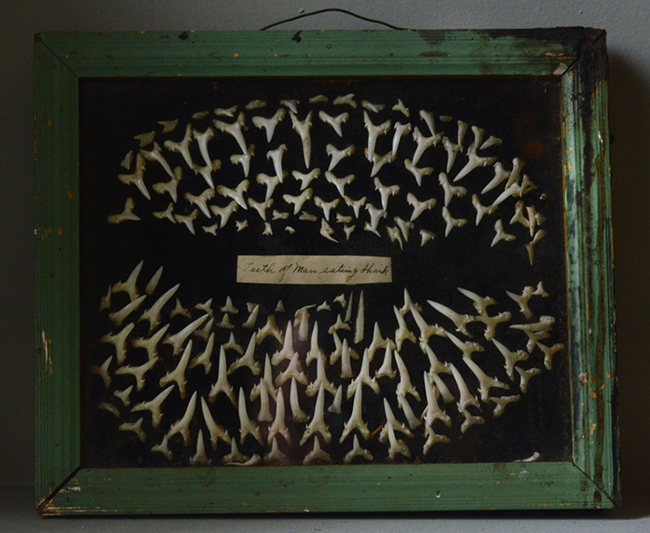 How do you typically approach sourcing your jewelry?

I buy everywhere I go, from every possible sort of venue.  But over the years I’ve developed relationships with a handful of trusted people that I buy from consistently from now.  New York is such an amazing place to find jewelry. So much nice American antique jewelry was made within 15 miles of the shop, and a lot of it is still right here.

How would you describe your client base?

We’re lucky to have a really diverse client base, but there’s definitely a concentration of customers in my demographic I guess: 30’s and living in Brooklyn.

I can’t even imagine how many couples you’ve worked with over finding the perfect engagement ring.  How do you think the process of purchasing a vintage ring differs from the mainstream engagement ring experience?

I think shopping for new engagement rings is sometimes overly focused on diamond specs. Nothing wrong with that necessarily, but new mountings often leave a lot to be desired. Mostly though, you have to be a little impulsive in buying a vintage engagement ring, since it’s probably only going to show up once. There’s something romantic about that I think.

What’s the most common misconception or mistake you see people struggle with when purchasing an engagement ring?

It’s really good to consider how it’s going to be worn. There are plenty of rings that stand up beautifully to everyday wear, but there are some that need to be worn a lot more delicately. Even the most delicate ring can be used as engagement ring— it just needs to be worn by someone who doesn’t mind taking it off before going rock climbing.

Do you have any favorite rings that have come through your store?  What makes them stand out to you?

There are so many I feel nostalgic for. Here are a few favorites from the last year: 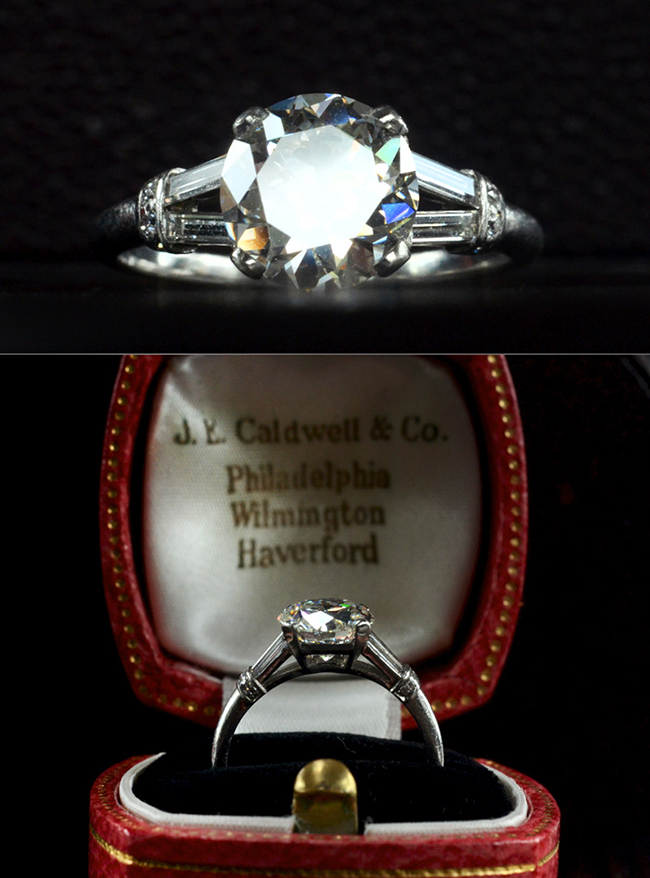 Just a beautifully designed big diamond ring from the 1930s. I struggle to find nice diamond rings over 1.50 carats— design-wise, the proportions get much trickier, and diamond-wise, it’s hard to find big stones that are white. 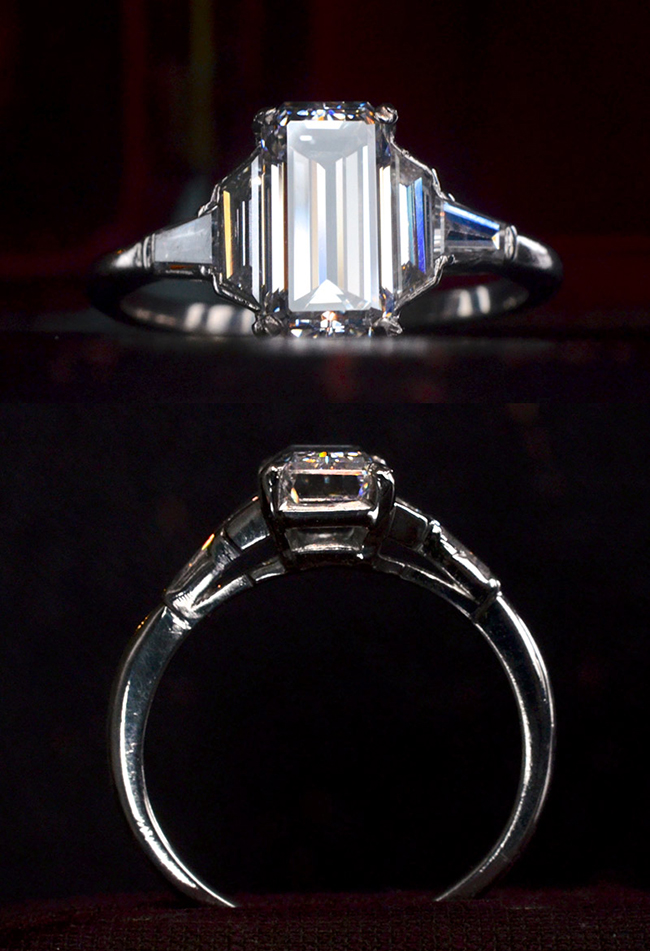 Genuinely Art Deco emerald cut diamonds are really scarce. This one was so spectacular and sleek, like something from the future. 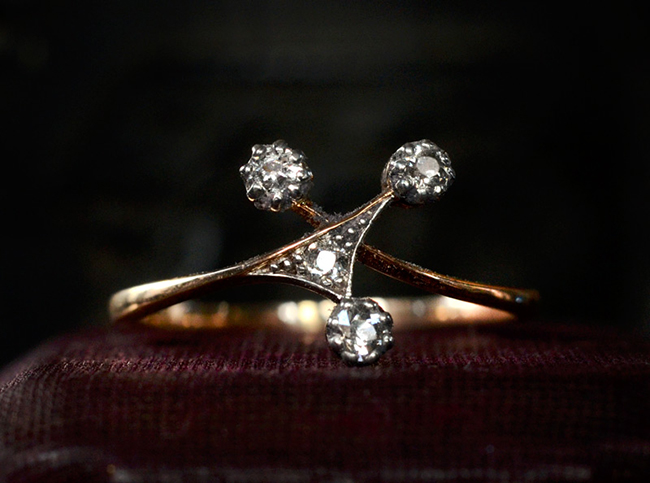 The turn of the century is one of my favorite-eras for design, especially for its play with asymmetry. A simple ring, with little diamonds, but not like anything I’ve ever seen before. 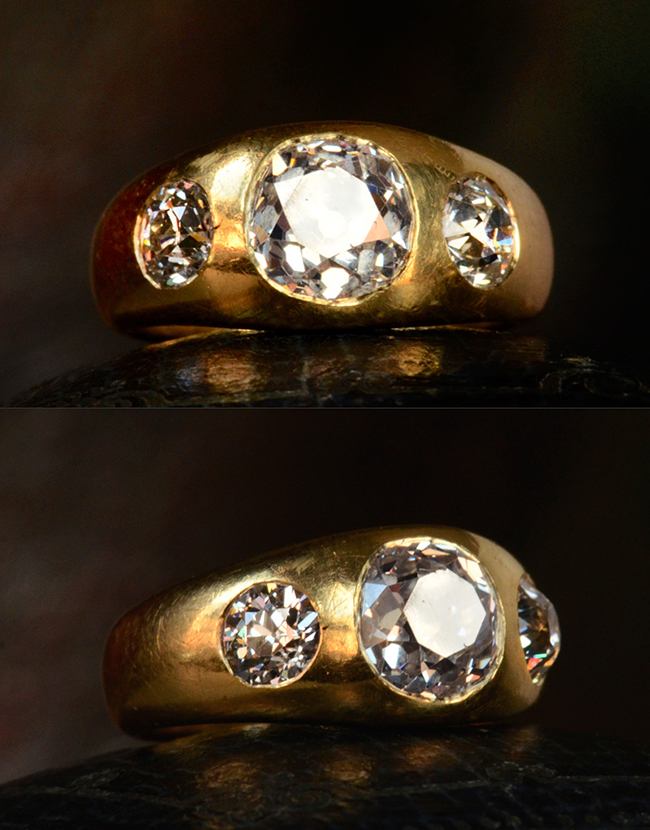 Sometimes it’s scale that makes something interesting. We’ve probably had at least a dozen rings of this design over the years, but the diamonds in this one are about 5 times the usual size.