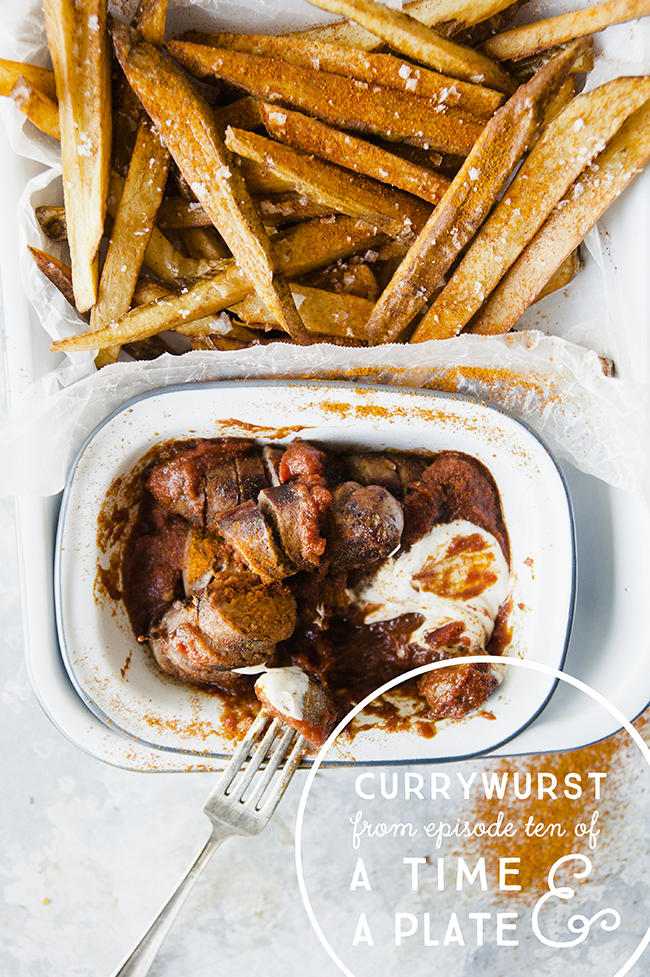 On today’s episode of A Time And A Plate, we look at the Candybomber of the Berlin Airlift, and the street food that came out of post-war Berlin, Currywurst. Currywurst can be argued as the emblematic dish of Berlin. Like Fish and Chips in London, or a Lobster roll in Maine. It was born directly out of postwar Berlin. The German sausage, American tomato sauce, British curry powder, and French fries form West Berlin on a plate.  The Currywurst Museum (Yes, there is a currywurst museum) traces the origin of the dish to post-WWII Berlin but, according to currywurst legend, a German rubble woman – a woman who would literally clear the rubble from Berlin’s post war streets – named Herta Heuwer got her hands on some English curry by trading it for liquor with British soldiers.

Experimenting with the spice in her kitchen, Ms. Heuwer soon concocted the cheap yet filling dish now known as currywurst: grilled sausage, sliced, with a gravy-like sauce containing English Curry and stewed tomatoes. Ms. Heuwer started selling her dish from a street stand on the fringes of what was to become Berlin’s red-light district. Construction workers and laborers were quick to warm up to it: Currywurst was different, yet still strangely familiar, and above all affordable — Ms. Heuwer sold it for 60 pfennig a portion, about $0.50 today.

It was an instant hit.  Knock-off stands and restaurants mushroomed across Berlin and into other cities. It’s a food that has come to represent Berlin’s post-war mentality. Its ability to move beyond a terrible past, to embrace new flavors and make them its own, reflects a food culture that is both traditional and still evolving. But they were all guesses at the original recipe — Ms. Heuwer never revealed the secret to her addictive sauce, taking it to her grave.

Similar to the hot dog stands across New York City, Currywurst is as much about your most trusted street vendor, his signature sauce and the people you meet there, as it is about the food itself.  There’s never been a McCurrywurst. On a cultural level, the dish came to represent the everyday German. Politicians pose in pictures with a plate of currywurst to create a humanizing PR moment.

And if you’ve never had it, it’s delicious. A perfect comfort food. 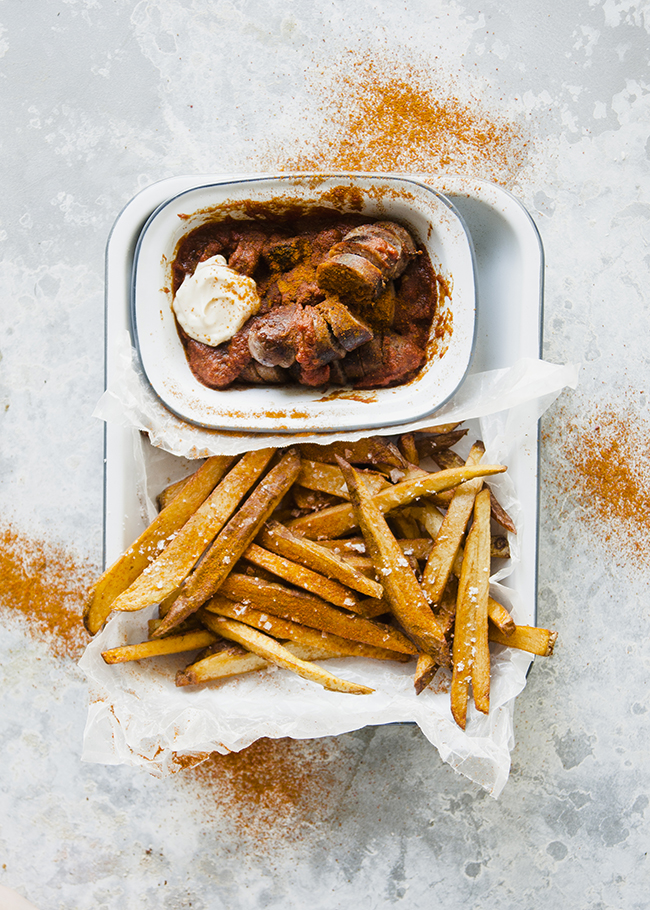 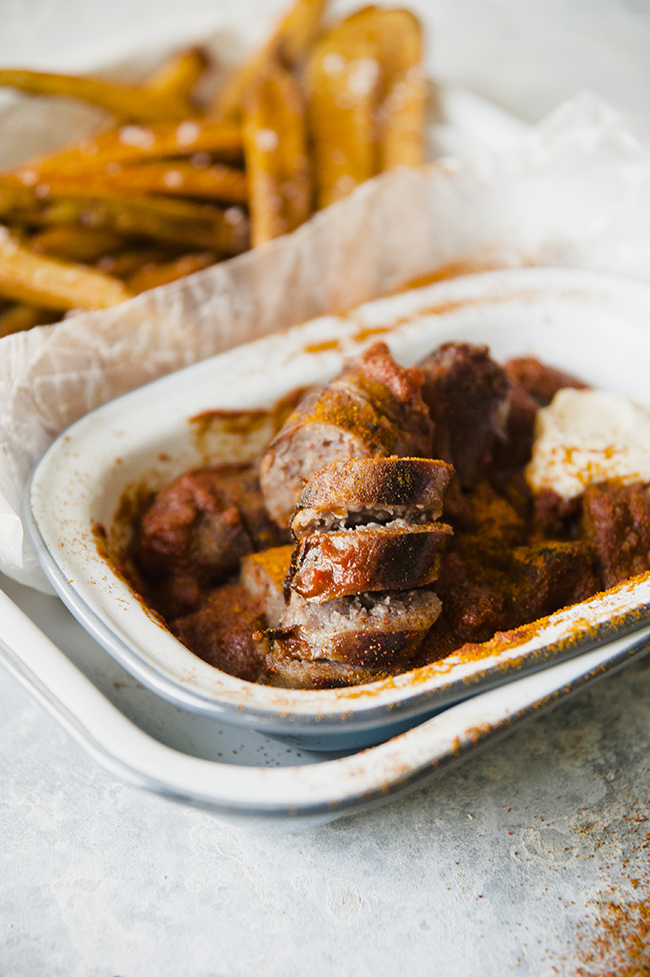 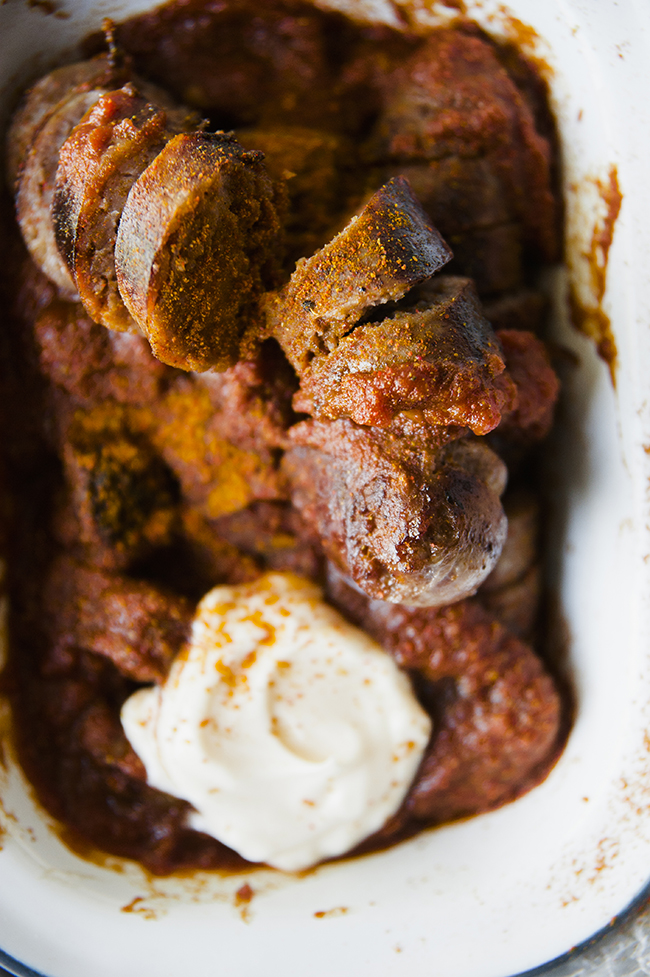 German sausages (I prefer bratwurst for this)

In a sauté pan or on a griddle at medium heat, cook the sausages until golden brown and cooked through. Slice up the sausages, add tomato sauce on top, and garnish with extra curry powder and mayonnaise. Serve with fries.

Pour tomato sauce into a large saucepan, then stir in the remaining ingredients. Let simmer over medium heat, occasionally stirring until reduced a bit and quite thick. Set aside for use, or cool and put in a lidded container in the fridge for up to two weeks. 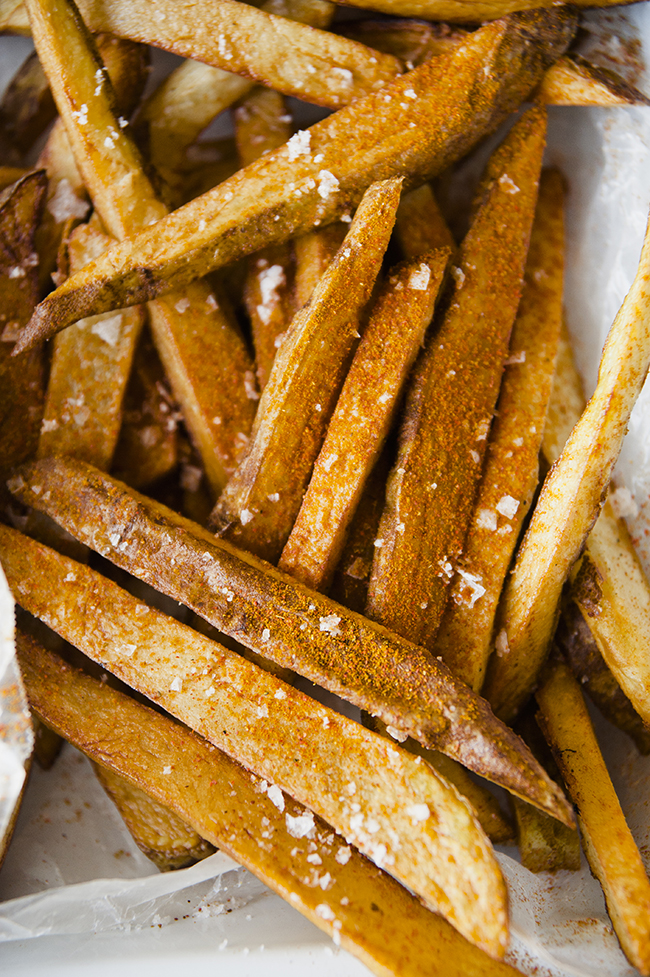 Heat the oil in a deep heavy pot over medium heat until it reaches 330 F.  Meanwhile, slice your russets into slices about a 1/4 inch thick, skin on.

When the oil is ready, add a third of the potato slices and stir once with some tongs, just to make sure they don’t clump together.  Cook for about 10 to 15 minutes, until a deep golden brown.  Cook the remaining fries in batches.

Set aside in a tray lined with paper towels.  Immediately sprinkle with sea salt.