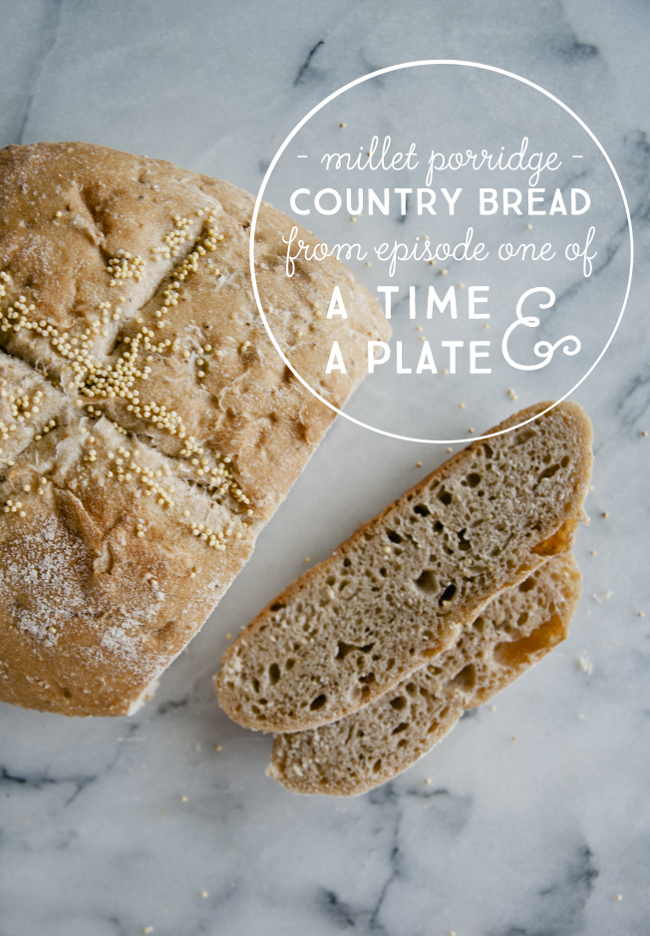 I am so excited to announce the launch of my podcast, A Time and A Plate. In each episode I’ll explore a historic moment in food in each century, starting from the year 1000 all the way to today.

It might seem impossible to believe that we have a lot in common with a peasant toiling in a medieval field at the turn of the second millennium, or a Venetian pirate as plague rampages through your city’s canals, or a young girl on trial for witchcraft, or a chef who cooked for princes and kings. But here’s the thing, everyone has to eat, and that primal need has been one of the major forces in world history since we gathered around the promethean fire. That’s what we’re exploring in this season’s podcast – how food has shaped who we have become. Super casual, right? One thousand years of history, explored plate first.

Tell me what you eat, and I will tell you who you are. Food is an expression of nationalist identity, ethnic roots, your family, your economics, your self-identity. Food and society are inseparable. And that’s the space this podcast will be living in. Telling stories – that’s what history is to me, a collection of stories bumping into each other like dominoes – about how food, and our relationship to it, is integral to understanding where we came from.

On today’s episode, we focus on bread, and have an interview with Nick Beitcher, baker at Tartine in San Francisco.

It’s funny to think that something that can be an afterthought between handing a server our menu and waiting for our main course was the cornerstone of humanities diet for centuries. It’s not until the last century, really, that bread lost its place as our main source of sustenance. Just think of that pyramid we grew up with in grade school, with what seems like an insane amount of grain making up our daily diet. But in the year 1000, grains and bread were at the center of both spiritual and secular life. Bread, the staff of life, was the prime symbol of nourishment.  We speak of “earning our bread”; we fear having “the bread taken out of our mouths.” Bread was, and still is in some respects, regarded as sacred, with the phrase “Give us this day our daily bread” at the center of the Lord’s prayer. In the Old Testament bread was the symbol of God’s providence, care, and nurture of His people. He sent manna to the Israelites in the wilderness. Christ gave new meaning to this symbolism when He said, “… I am the bread of life: he that cometh to me shall never hunger ..:” (John 6:35). At the Last Supper, Christ used bread as the symbol of His sacrifice upon the Cross. “And he took bread, and gave thanks and brake it, and gave unto them, saying, This is my body which is given for you: This do in remembrance of me”. Until quite recently French peasants of the old school would make a sign of the cross over bread before they cut or broke it.  Bread is loaded with spiritual symbolism and depth of meaning.  This is lost on us with a modern diet which consists of an embarrassment of choices. Today, we’re going to talk about bread as the jumping off point for innovation and revolution in medieval Europe.

Here’s Nick’s delicious recipe for Millet Porridge Country Bread. It so delicious with some butter and sea salt. 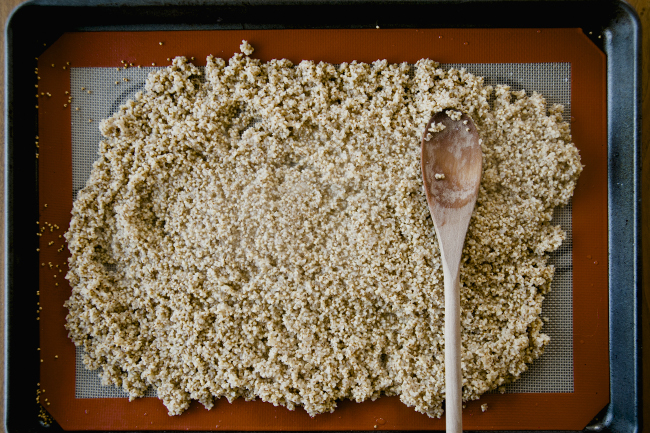 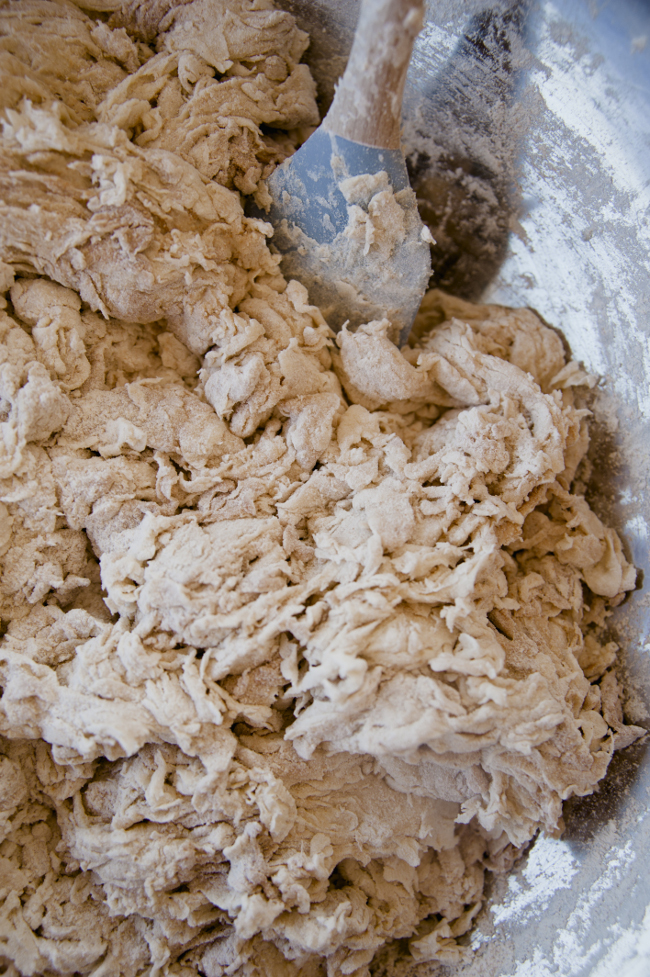 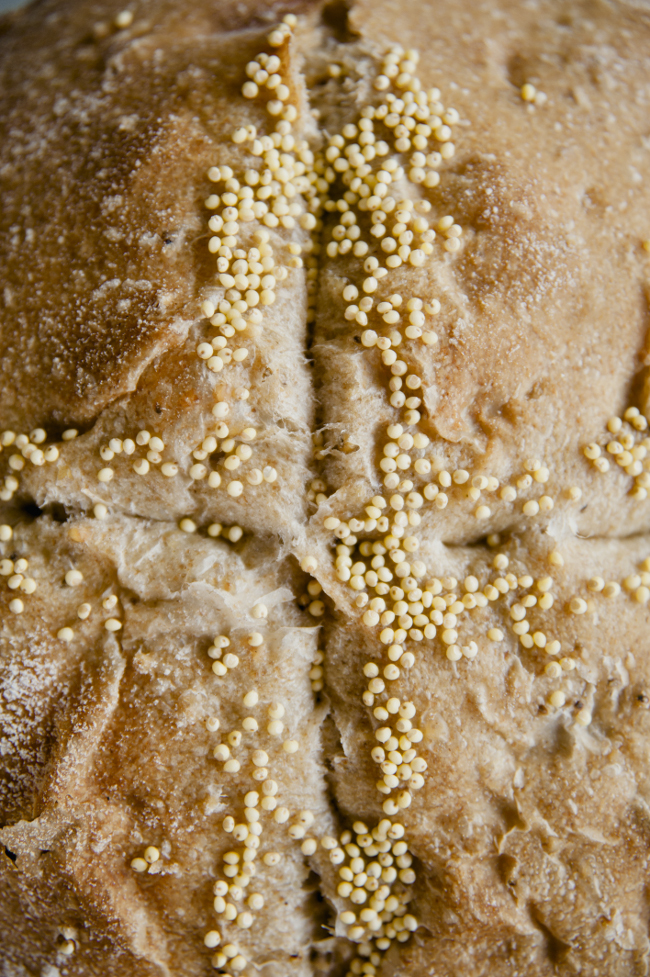 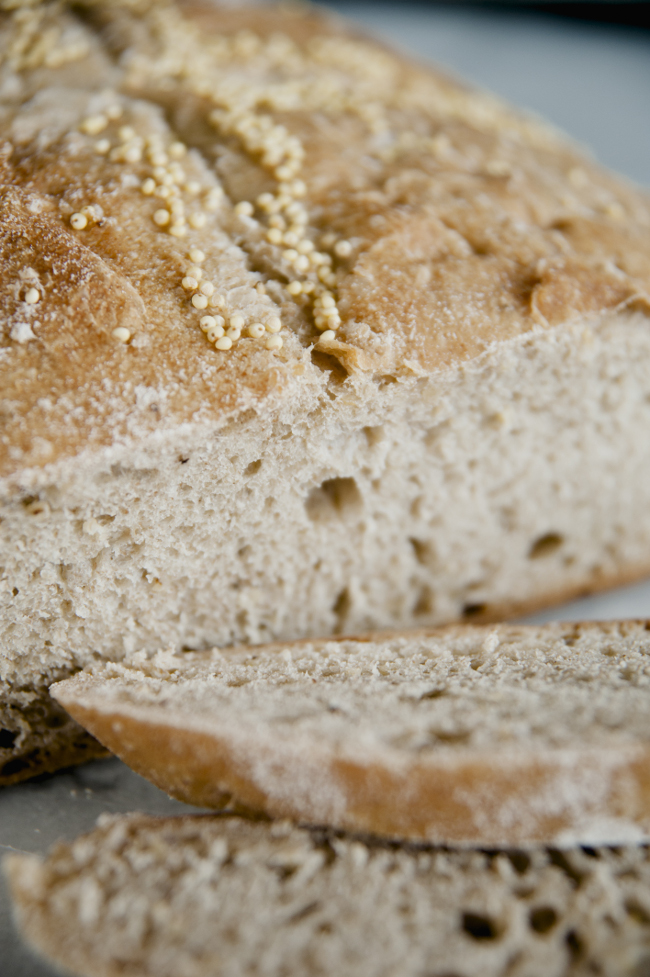 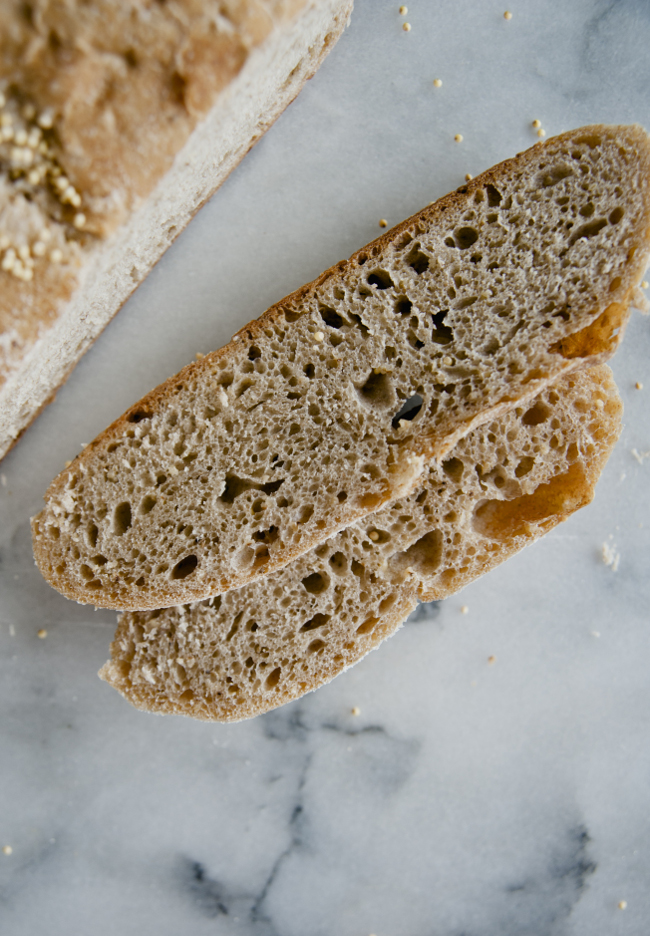 Spread millet evenly on a baking pan and toast in oven, rotating and stirring frequently, until very nutty and dark golden brown, about 15  minutes.  Carefully scrape the hot millet into a pot with 3 cups water, and slowly bring to a boil with a pinch of salt, stirring often to prevent scorching.  Cook just below a boil until millet has broken down completely and is pleasant to eat (i.e. not chalky).  Spread cooked millet onto a flat surface (baking pan with parchment paper, large plate, etc.), and let cool at room temperature.  This step can be completed up to a day before mixing your bread dough.

Combine water, sourdough culture, and flours in a bowl.  Gently mix together by hand until a cohesive but shaggy mass has formed, and no dry flour remains.  Allow to rest, uncovered, for 30 minutes.

Gently fold the dough, stretching each corner of the dough up and over the central mass.  This will develop the gluten gently.  Allow to rest for 5 minutes, and then repeat the folding process.  Rest for an additional 5 minutes.

Sprinkle salt and a drizzle of water onto the dough, and gently massage into the dough until salt is fully incorporated.  Allow to rest for 10 minutes.

Add the millet porridge (at room temperature) a small handful at a time, and gently incorporate by squeezing the porridge into the dough.  It’s very possible that your dough will not need all of the porridge- Ideally your dough should feel cohesive, and not loose or runny.

After 3 hours of fermentation, your dough should be ready to divide.  In order to judge whether this is the case, note whether the dough has a “domed” appearance, is full of gas bubbles, and seems to be well aerated throughout.  Turn dough out onto a clean work table, and divide into four 1 kilo loaves.  Using a bench knife, gently round the loaves into a tight ball and allow to rest on your work surface for 30 minutes.  Lightly flour the top each loaf, turn upside down onto the table, and lightly fold the dough into an envelope (refer to youtube videos for reference).  Allow to rest in this form for 5 minutes, and then gently place, upside down, into a bowl lined with a lightly floured kitchen towel.  Leave out at room temperature for 1 hour, and then place into a refrigerator for 12 hours.

To bake, preheat your oven to 500 degrees, or the highest setting.  Preheat a dutch oven or cast-iron pan (must have a lid- Lodge is a great brand), for 20 minutes.  Gently turn out your loaf into the preheated dutch oven/cast-iron pan, cover immediately, and bake for 20 minutes.  Uncover, turn heat down to 450, and continue cooking for another 20 minutes, or until deep golden brown and 210 degrees inside.  Carefully remove loaf and allow to cool before slicing!!

Additional Note:  This is a clumsily abridged version of the Tartine method of making bread.  For an in-depth explanation, the Tartine Bread book is the definitive source.